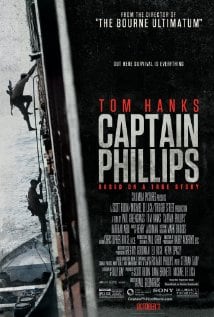 [xrr rating=4.25/5]In Captain Phillips, a handful of Somali pirates capture an American towing ship, eventually making off with its captain in a cramped lifeboat. Returning to a frightening and factual story like the ones that propelled Bloody Sunday and United 93, director Paul Greengrass is one of the ballsiest directors in the game. Despite the “too soon” lamentation that billowed up about it from a handful of critics, United 93 remains one of the most devastating films to come out of this young century, and with Captain Phillips, Greengrass and star Tom Hanks create one of the most suspenseful and surprisingly emotional movies of the year.

Based on Richard Phillips’ autobiographical account of the 2009 hijacking and kidnapping, A Captain’s Duty, the film takes place mainly aboard the Maersk Alabama and the tiny lifeboat that the four Somalis use to make off with the titular captain. The film takes a bit of time to find its groove, as Greengrass sets up some diametric scenes to compare and contrast the quiet Vermont home life of Phillips with the hard-scrabble, violent existence of the Somali pirates. Both are feeling the pinch of the economic crisis and both are willing to take risks to provide for their families.

Once the creaky introduction has passed, Captain Phillips settles into a new groove, this one suspenseful, which escalates to armrest-gripping terror over the next two hours. Anyone with a pulse knows that Phillips survived the kidnapping, but it’s a testament to Greengrass’ filmmaking chops that we can forgot about logic and get lost in the visceral dread unfolding on the screen before us. After a valiant attempt to ward off the pirates, a group of four Somalis manage to board the Alabama and take control. Matching Hanks in intensity is newcomer Barkhad Abdi, who plays the group’s leader Muse. Emaciated and bug-eyed, Muse swings from sympathetic to terrifying as what he believed would be a simple operation crumbles and his desperation becomes more and more apparent.

Greengrass has made more than historical reenactments in his career, and in Captain Phillips he shows it with the way he combines the eye for exquisite detail that he employed in Bloody Sunday with the heart-pounding sense for action sequences he masterfully executed in The Bourne Ultimatum. His attempts to shake up similarities between Muse and Phillips may feel heavy-handed, but as a procedural, Captain Phillips shines. Unlike United 93, Captain Phillips is not a detached look at an international crisis. Although we don’t really learn much about Phillips, the casting choice of Hanks (rather than an unknown) harkens back to James Nesbitt’s sympathetic portrayal of Irish politician Ivan Cooper in Bloody Sunday, giving the film an emotional core that United 93 lacked. The scale, however, is different as the United 93 disaster had global implications while the Maersk Alabama kidnapping was made less so with a happy ending for all (Americans) involved.

Tom Hanks has stepped out his American Everyman persona with some brave role choices lately and he may be rewarded with another Oscar for Captain Phillips. Picking up on the excellent work he did in last year’s underrated Cloud Atlas, Hanks shines as the beleaguered captain, doing some of the best work of his career, especially in the tense hour inside the lifeboat. Hanks’ prior stoicism melts away into abject fear, leaving us to watch a master class in acting; he seems to encourage the four unknown actors who play the Somalis to match his level. That, in itself, is a sign of a class actor.

If I was at all wavering about the film, Hanks sealed the deal for me in the closing moments. In a heartbreaking moment, Hanks rips the guts out of the idea of a simple film where the hero walks away and merely brushes aside the trauma and the pain we watched him endure. Hanks digs deep without pandering, neatly side-stepping a breakdown of Oskar Schindler proportions. Nothing feels false and in its final 30 minutes Captain Phillips is damned near perfect. Along with Before Midnight, This is the End and Short Term 12, Captain Phillips easily makes the case for one of the best films of 2013.