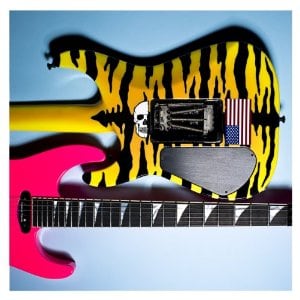 I’m not really looking for restraint, refinement or even humility in a new Sleigh Bells record, so I’m pretty pleased with the way Bitter Rivals opens. The third full-length from the Brooklyn duo begins with about 30 seconds of oddball audio clatter—a high-pitched voice cooing and mewing, the metal sweep of a sword being unsheathed, finger snaps, hard strums on a guitar, a dog barking—before erupting into one of the band’s trademark explosive riffs and Alexis Krauss roaring out the first lyric, a terrifically audacious appropriation of one of the most famous lines in all of literature: “It was the best of times/ It was the worst of times.” This title cut flies forward with a thrilling fury to an infectious chorus that encompasses the combative, conflicted Sleigh Bells dynamic nicely: “You are my bitter rival/ But I need you for survival.” It’s exactly the sort of tension that drives their songs.

Sleigh Bells may have seen their cool kid stock drop somewhat after the lukewarm (at best) reaction to their 2012 sophomore effort, Reign of Terror, but they’ve stayed true to the brash, bold aesthetic that grabbed everyone’s attention in the first place. They’re the pungent, slightly rancid glob of bubble gum affixed to the inside of a high school locker door that’s visibly taken a few punches, thumbprint from pressing it into place as clear as can be. While they operate with the constant risk that they’re going to be little more than a sleazier version of the Tings Tings (who, after all, got to the crazy catchy, cranked-up-guitars dance rock first), when they’re cooking, it can be hard to resist Sleigh Bells’ insistent verve. Multi-instrumentalist Derek Miller builds bristling beds of music for the songs, with little details sparking in from the corners and allowing the pointed vocals of Krauss to nestle in nicely. It works better on the firebombs like “Sugarcane” and “Tiger Kit” than it does on the more tender tracks (the pining “To Hell with You”), which certainly causes doubts about the breadth and long-tern viability of the band. They can’t keep remaking “Infinity Guitars” forever, can they?

If Sleigh Bells’ attempts at diversity don’t necessarily yield stellar results, they still exploit their sweet spot fairly well. “Minnie” is so rat-a-tat explosive it comes across as the sound of the band’s collective id (lyrics like “Strike fear in their hearts like a devil/ And if it comes to this, well then it comes to this” only compound that sense), and if album closer “Love Sick” tones down the buzz a bit, it still has that headlong energy, as if the band is somehow engaged in a race with the song, trying to beat it to the end. There’s no point repeating a formula unless it works, and through much of Bitter Rivals (or at least enough of it) Sleigh Bells is still mighty convincing. If they can get so deep into their own sound and its variants that it becomes like racing on a razor wire oval (as on the overly repetitive “Sing Like a Wire”), then at least their best moments demonstrate exactly why they keep drilling into that same vein. They’re bound to come up empty someday, but, for right now, there’s still gold to be found.