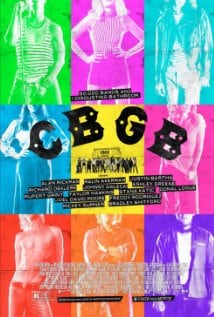 [xrr rating=1.5/5]“The Ramones … became so iconic that their music can now be heard in commercials and their CDs can be purchased at Starbucks.” This is one of the “Where are they now?” tales featured at the end of director Randall Miller’s semi-fictional biopic of Hilly Kristal (played here by Alan Rickman) and CBGB, the music club he ran in New York’s Bowery district. As the “Where are they now?” segments attest to, CBGB has a great soundtrack. Fans of Television and Talking Heads and other bands that Kristal shepherded to fame will be thrilled to hear some of their favorite records in a big-screen movie. But those same fans will probably regret that such great music went into such a lousy movie.

A movie about music should get that music right, but even if CBGB is fueled by great music, it gets something very basic very wrong. The dual-guitar threat of Tom Verlaine and Richard Lloyd gave Television the reputation for great, transcendent live shows. So how is this legacy honored as they’re depicted in this fictionalized story? Through lip-syncing.

In fact, almost all of the actors recreating those live performances are forced to lip-sync to original studio recordings. While this may have saved us even worse musical impersonations, the movie’s producers did not spare viewers the gross indignities of some of the worst impersonations seen on film this year.

Possibly the worst of those impersonations belongs to the usually reliable acting presence upon whose badly-coiffed shoulders CBGB carries so much great music to its death. Alan Rickman has already sullied theaters in 2013 with his non-impersonation of Ronald Reagan in Lee Daniels’ The Butler. That film’s makeup artists got Reagan’s California skin tone right, and Rickman made a cursory attempt at the way the Great Communicator tilted his head just so, but then Rickman flubbed the deal by not even attempting to disguise his Royal Shakespeare Company-accent.

What happened to this once commanding actor? In 1987, Rickman burst onto American movie screens as the great villain Hans Gruber in Die Hard. If his 2013 challenge was to top his Butler cameo with a feature-length phoned-in performance, then he completely hit his mark with CBGB.

The screenplay doesn’t help. “The Palace Bar. I like the irony,” Rickman says the first time he walks into the space that will become CBGB. The line is typical of the kind of unironic dialogue that peppers the cornball script. Perhaps Rickman is trying to quietly subvert years of American actors’ bad English accents by playing the New York-born, New Jersey-raised Kristal with no change of his natural accent at all.
That this man is the movie’s lead is bad enough, but his bizarrely British-accented Jersey farm boy is not even the worst impersonation in the movie. Take your pick: an insufferable Mickey Sumner as Patti Smith or Kyle Gallner, who has all the presence of a bleached-blonde teenager going trick-or-treating, playing Lou Reed minus any trace of the rock star’s cool?

Miller’s most notable feature to date is the 1992 Kid ‘n’ Play vehicle Class Act, which tells you all you need to know about his punk pedigree. The script’s attempts at punk authenticity basically rely on a recurring joke about the club’s notorious bathroom, which was recently “recreated” for the Metropolitan Museum of Art’s equally misguided exhibit Punk: Chaos to Couture.

The slick commercialism of that blockbuster museum show seemed to drive a diamond-studded safety pin through the heart of anything that resembled a true rock and roll spirit. Similarly, the missteps of CBGB should serve as a cautionary tale for rebel movements. There’s one particularly telling “Where are they now?” detail the film doesn’t follow up on: CBGB regular Mary Harron (played in the movie by Ahna O’Reilly) worked for the iconic PUNK magazine, among other accolades of the punk era. Harron went on to direct a sly, high-quality adaptation of Bret Easton Ellis’ American Psycho. But her most recent credit? A Lifetime Channel biopic of Anna Nicole. And yet as bad as that sounds, it’s a better movie than CBGB.