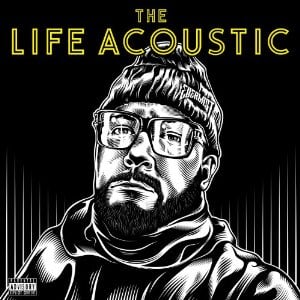 [xrr rating=2.75/5]For almost 25 years, Everlast has been putting out music that’s crossed genres, topped the charts and seen him collaborate with everyone from Ice-T and Snoop Dogg to Willie Nelson and Santana to Kurupt and Ill Bill. The fact that he’s dabbled in so many scenes and found success in all of them speaks volumes to just how talented the former House of Pain frontman is. While his more recent albums and group projects could be better defined as cult successes, said cults are all different and far reaching enough to warrant the belief that a lot of really different people want to hear Everlast keep making a lot of different music. But Everlast gets hyper-selective with his latest release The Life Acoustic.

As you may have extrapolated from the title, The Life Acoustic references a Wes Anderson film while announcing an acoustic Everlast album. But instead of new acoustic material, the new record takes selections from the past two decades of Everlast and presents them in very stripped down acoustic renditions, sometimes only accompanied by piano. It’s also a studio album, so instead of the intimacy of a small acoustic performance, we’re given Everlast playing these songs just for us. We also don’t get the bigger Everlast hits like “What It’s Like,” “Ends” or “Put Your Lights On.” Rather, we largely get album cuts presented here in a newer acoustic light.

A Life Acoustic starts out very strong with the excellent reimagining of White Trash Beautiful’s “Sad Girl.” Emphasizing the quiet nuances of his trademark gravel road voice and the bluesy journeyman storyteller elements of his guitar playing, “Sad Girl” is exactly what you would ideally want from an Everlast acoustic album 15 years after his folk-hop transformation. Other songs on the project like “Stone in My Hand,” “Lonely Road” and “Grandma’s Hand” follow this same blueprint to the same shared success. Unfortunately, it’s when the project veers into not-veering-enough territory that the shortcomings show.

The biggest song from Everlast’s solo career on here, “Black Jesus,” actually works in this bare-minimum acoustic format as there are enough moving parts in his delivery and the arrangement to keep things interesting. But overly long efforts like “Today” or “Stay” start out as passable only to drag on until they halt momentum. Elsewhere, compared to their studio versions, the cover of Slick Rick’s “Children’s Story” (now without Rahzel) or “My Medicine” (now without Willie Nelson and Snoop Dogg) take away a big part of the charm that made his earlier versions so endearing. The closer, an acoustic version of “Jump Around” (fittingly retitled “Jump Around?”) just does not work at all, even from a quirky hip-hop-cover-on-a-guitar standpoint.

The Life Acoustic is a mixed bag of high highs and low lows. “Shy Girl,” “Black Jesus” and “Lonely Road” are spectacular enough to remind you that, on paper, an Everlast acoustic album is an incredible idea. “Today” and “Jump Around?” are the pitfalls that remind you why such a project needs to be handled delicately. If you haven’t heard from Everlast for a while, The Life Acoustic is a great way to play catch-up on some great stuff you may have missed. Just prepare to cherry pick.