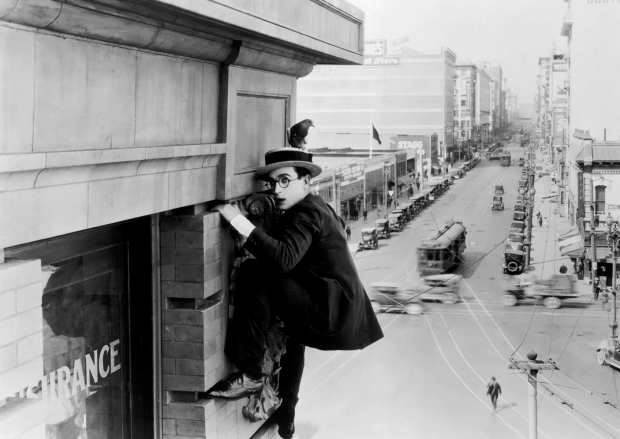 Almost every revisionist review of Harold Lloyd and his work compares the filmmaker to Buster Keaton and Charles Chaplin, and then pushes into a litany about why he isn’t held in the same stature as those two silent film titans. It is inevitable that Lloyd will be always be the least known in the triumvirate of silent masters, but isn’t there always one like him? The Beats had Kerouac and Ginsburg, but there is also Ferlinghetti. The Lost Generation boasts Hemingway and Fitzgerald, but then there’s also Hart Crane. The New Wave had Truffaut and Godard, but what about Jacques Demy? The shadow cast over Lloyd’s legacy guarantees one thing: his work is even more special upon rediscovery.

The best place to begin is his fourth full-length feature, Safety Last! (1923), a 73 minute thrill ride that not only matches Keaton’s acrobatics and Chaplin’s sense of pathos, but also sets the template for the modern action film. Lloyd stars as “The Boy,” a starry-eyed dreamer who moves from the country to the city to find success before he sends for his sweetheart (Mildred Davis) and marries her. But a series of unfortunate events not only puts Lloyd’s prospects in jeopardy, they hang his very life on a precipice in the film’s still-suspenseful final sequence, which finds our hero scaling the face of a 16-story building.

Grossing more than a million dollars, Safety Last! is not a little-seen gem recently found in an insane asylum or saved from the ravages of time. In his time, Lloyd did quite well in the movies and enjoyed a fruitful retirement after the era of talkies ushered him (as well as Keaton) out of the limelight. But while Keaton and Chaplin often played characters that existed outside of the societal mainstream, Lloyd’s “Glasses Character” walked among the masses, the embodiment of white bread, middle class America. Lloyd knew that he could use this anonymity to his advantage, claiming in 1969, “In the pictures that I did, I could be an introvert, a little weakling, and another could be an introvert, the sophisticate, the hypochondriac. They looked alike in appearance, with the glasses, which I guess you’d call a typical American boy.” Chaplin had to retire his Little Tramp, moving on to play dictators and effete wife-murderers. Lloyd’s character may have been more protean, but his situation isn’t too much different than The Tramp’s in Modern Times. 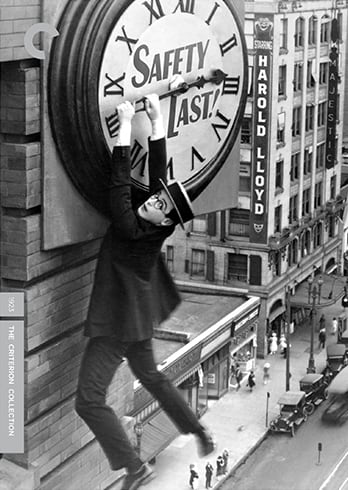 While claiming to his love in daily letters that he has landed an important position, Lloyd (as he’s called in the film) is barely scraping by working in the fabric department of DeVore’s department store. When we first see our hapless hero he is living with a construction worker and has hocked their record player to buy a bauble for his girlfriend to keep up the appearance of wealth. Safety Last! isn’t a mindless comedy, but rather a critique of life in a society dictated by the accumulation of capital, something that is nearly impossible in a dead-end job like the one at the fabric counter. When the film begins, our hero is leaving his little town for the city, offering Lloyd-the-director a chance to pull a funny visual trick, framing the railroad station as a jail, the train signal standing in for a noose. The character is leaving the relative safeness of small town USA, his money chase the precursor to hanging himself. As one mishap follows another over the course of the next hour, the prophecy comes true, with everything sugarcoated by Lloyd as ingenious sight gags.

A series of misunderstandings leads to the climax, a sweaty 20 minutes where Lloyd must scale the building that houses DeVore’s while a crowd of hundreds cheers from below. Fighting off pigeons, a wayward badminton net and overzealous denizens of the building, Lloyd slowly makes his way to the top and the promise of $1,000 in an extended metaphor of the hoops one is asked to jump through when lucre is the reward. It is also a commentary on the near impossibility of social mobility, as Lloyd slowly and precariously scales the sheer heights of the building. In an age before CGI, Lloyd, like Keaton, put himself in danger while shooting these scenes, making them even more hair-raising once the reality of their creation has set in.

While Chaplin and Keaton remain most dear to cinephiles, all three comedians are ripe for rediscovery, especially as CGI and 3D are bleeding away the magic of the movies. Like Chaplin and Keaton, Lloyd’s films make us believe that the impossible can become reality. The discussion about Safety Last! needs to move beyond the forgotten genius narrative and assume that the film is part of a great canon. It certainly deserves the honor.