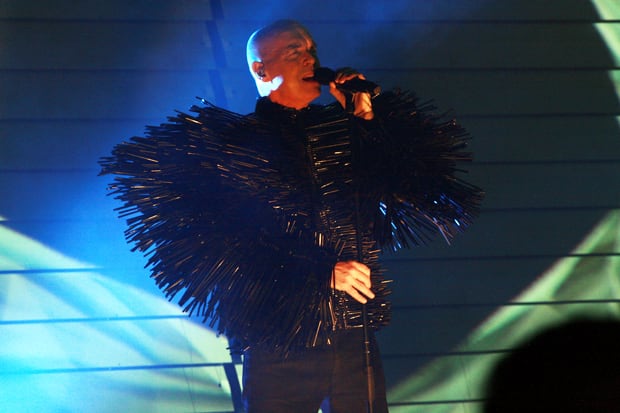 One of my friends called me a “fag” when I told him that I was seeing the Pet Shop Boys in concert. Now, I know he was joking, but it’s curious that this sort of joke still exists in 2013, more than 25 years after the Pet Shop Boys scored a major hit with “It’s a Sin,” homosexuality presumably roped into the myriad of iniquities considered sin by the Catholic Church. But if my seeing the Pet Shop Boys as a straight male is a problem, there were many other people in the audience who should riding the flames along with me in the pits of hell.

No, that isn’t a reference to the numerous homosexuals who came out to see the Pet Shop Boys’ first Portland concert ever. Instead, I am including all the people who decided to play amateur filmmaker with their phone that night, videoing the concert rather than living it. Smartphones have become a blight on our society in many ways, but the constant filmmaker is one of the most annoying affronts these handheld devices can encourage. Elbows akimbo, bright light shining back in our faces, at least six people directly in front of me clamored to capture Neil Tennant and Chris Lowe, excitedly straining forward with each new hit and every costume change. With all the lights and lasers and haze and smoke, it’s impossible these guys caught good video. How could they with four or five other beacons ahead of them crowding up the frame? People filming people filming a concert. Jesus.

Although the audience thrummed with excitement before the show began, we didn’t see any extreme dancing at the Schnitz that night. Polite swaying, some head-nodding, but no out-and-out explosions of self-expression. The venue made it difficult. The Pet Shop Boys created dance-oriented music, but the stately auditorium is designed more for a symphony rather than, say, a rave. At the same time, security trolled the aisles, keeping wayward dancers in their designated seats. One has to keep order, but at what price? People complain that our fair city is too restrained, too droll. Take away the chairs and the security, give us the Pet Shop Boys and we’ll show you what we can do.

Detachment has long been a trademark of Pet Shop Boys decorum and while the two musicians dutifully played through hits such as “West End Girls” and “Suburbia,” a pair of dancers (often cloaked in horse-skull masks) provided the focal point on stage. Tennant sounded good of voice but spent a lot of time hiding behind costumes. Lowe stood steely at his keyboard. But that’s his thing.

Somehow, the show still managed to overcome the dicks with the phones and the limited dance space and won me over. I’ve been a fan for nearly 25 years, at least ever since “It’s a Sin” debuted on MTV, and I got to hear all of the songs I longed for, including “Opportunities (Let’s Make Lots of Money),” a hyperactive version of “Rent” and a brilliant version of “Always on My Mind.”

But the Pet Shop Boys are more than a novelty act. Our local weekly rag and even the scalper outside claimed that band still has a healthy record-and-concert-ticket-buying contingency overseas. It has just frozen here in the United States. New album, Electric, is receiving great reviews and the band continues to sell out in Europe. So what is it? American puritanism keeping success at bay? Not necessarily since being gay is more accepted now than ever. But there are still closeted homophobes and a band with an ‘80s heyday may struggle to cash in on the more recent gay-friendly zeitgeist.

Nothing is more telling than this exchange outside the theatre while we waited in line to get in. A rather uncultured family walked by and inquired who was playing. The guy behind me told him, to which he pointed to his young daughter and responded, “That’s a little before her time.”

“They just put out two records in the last year,” the guy behind me responded, somewhat smugly. “So it’s actually very much of her time.”

The guy pulled on his baseball cap and grimaced. He probably thought we were all fags.