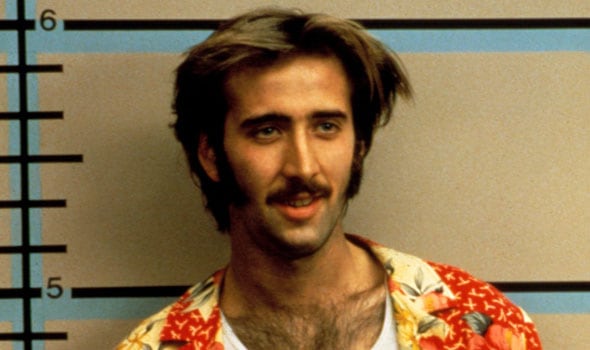 Have you ever sat down and watched the entire oeuvre of Nicolas Cage? No? I have. If you never want to, I hope to convince you to stop refraining from the act just because you mistakenly paid to see, say, The Sorcerer’s Apprentice, or because you buy into the sizable chunk of the internet that insists on perpetuating the myth that one of the greatest actors alive is a tasteless ham. If you take a deep look at the Cage oeuvre, I submit, you will primarily be doing one very worthwhile thing: taking a sightseeing tour through the mind of a wealthy, reasonably socially adjusted and very talented maniac. In addition, you’ll be watching an essential slice of the history of the movies in America for the past 30 years, a slice that no one can or should avoid.

Most likely there is no other major movie star who’s endured the level of ridicule that’s been thrust upon Cage. Mel Gibson is the only one who takes as much flak, but he differs from Cage in two very important ways: 1) He’s actually done things that are genuinely offensive, and 2) he’s nowhere near as talented. Many refuse to admit Cage’s talent, and I’d simply ask them to refer not to my personal feelings on the actor but to the collective ones of Joel and Ethan Coen, John Dahl, Mike Figgis, David Lynch, Martin Scorsese, Spike Jonze, Andrew Niccol, Werner Herzog and David Gordon Green.

The essence of the anti-Cage campaigns rest both on his endless onslaught of seemingly terrible films and on his supposedly over-the-top acting, even in his better outings. By your average anti-Cage blogger’s estimation, his terrible films make up 90% of his filmography, with only Leaving Las Vegas, Adaptation, Bringing Out the Dead and a few others standing up for what many consider his faded skill. As to the first argument, I think history will suss out the truly worthless Cage blockbusters from the interesting ones (i.e. hate The Sorcerer’s Apprentice, National Treasure and Ghost Rider all you want, for they deserve it, but lay off of Ghost Rider: Spirit of Vengeance, Con Air and Knowing until you’ve watched them critically, for they are much more than you think). As to the second, take a look at the range of his restrained, finely-tuned performances and notice that they’re found in big and small movies alike: The Weather Man, World Trade Center and Matchstick Men on the big-budget side, Leaving Las Vegas, Adaptation, and The Frozen Ground on the small. Next, take a look at the better-known Cage, the performances in which he’s gone for maniacal broke, and note their astounding range: from outright slapstick in a small movie (Raising Arizona) to virtual self-parody in a big one (Drive Angry) to scary method-level psychosis in something in between (Bad Lieutenant: Port of Call New Orleans). All of which offers a measure of proof that Cage not only brings commitment to his best movies, he brings a level of modulation that his critics often deny.

The movies cited above span from one side of Cage’s career to the other, which proves something else: he is consistently inconsistent. It seems that he can’t stay on top for long or make two great films in a row. Call it following his muse, or the childish need to see himself on screen as an action star, or simply the inability to sit still, but his cinematic ramblings have meant he’s never had a steady stream of successes. By his own somewhat self-serving admission, he’s never wanted to “do whatever the intelligentsia or the critics or the community or whatever thought I should do.” This attitude, or lack of planning, has led him down a pretty dire road of late.

I re-watch Raising Arizona, Red Rock West, Leaving Las Vegas, Bringing Out the Dead and Adaptation as often as I can, and collectively they make me sad. Because what I often see in the recent Cage is a truly great—maybe a once-in-a-generation-great—actor pretending that he’s merely a very good actor. At this low point in his career, Cage is taking roles in rote, medium-budget thrillers as everymen, usually cops or morally justified criminals, and he is self-consciously reining in his excess to give these roles a level of gravitas that often seem out of place. He should be flying way over the top in the mediocre movies, if only to make them more interesting. He needs to be with the Scorseses and Herzogs and Jonzes and Coens if his talent is really going to shine. Merely competent directors are only going to highlight the sleepy ease with which Cage executes those by-the-numbers characters. Roger Donaldson and Joel Schumacher and Scott Walker are perfectly capable genre directors, but to harness, as Herzog put it, “a force like Nicolas Cage,” you need to be as crazy as Cage, and he has only rarely found that director willing to give him back the complete balls-out energy that he will give when met with the right kind of challenging role. If he doesn’t get it, he’ll be starring in very obviously shit movies in order to pay his real-life mortgages or his debts. The results are little-seen thrillers that should be the bread-and-butter of second-rate actors like, say, Thomas Jane or Cuba Gooding, Jr. falling at the feet of a man who could be capable of Daniel Day-Lewis heights of brilliance if only he could dial it back personally.

Undeniably, the main factor that’s kept Cage mired in nonstop ridicule and second-rate movies is the actor himself, specifically that exact craziness that Herzog loves. Day-Lewis never claimed to have invented a new acting style (Cage calls his “nouveau shamanic” and claims to have painted his face white, meditated and then refused to speak to his costars on set in an attempt to convince himself that he was a being from another dimension, all in service of the performance; watch him discuss this and you might catch the hint of terror in his eyes at the exact moment he realizes that others will think this is crazy rather than funny). No discussion of Cage’s good performances or his bad ones would be fully formed without making mention of his very famous, often entertaining eccentricities. But give a man like that a huge well of talent, and let that talent lead him to enormous amounts of money, and you wind up with a movie star who’s given his all to a dozen brilliant directors in service of a dozen brilliant films who also owns pythons, Scottish castles and a Tyrannosaurus skull. Are the latter really so bad?

In the end, however, there are as many people sick to death of hearing how Cage is “underrated” as there are those like me who are genuinely fascinated by him. I want them to continue listening to pro-Cage arguments and disagreeing with them, because at least they’re thinking about it. Cage isn’t a Kardashian or a Cyrus; he doesn’t deserve the internet drubbings he’s subjected to. He’s probably as nuts as the internet queens, but he’s genuinely nuts, not the calculated-for-fame kind. The real point is that he’s capable of putting out art that’s worth taking in. There is no other actor who’s been around as long, made as many memorable, cultural-consciousness movies and worked with such a list of great directors who can so easily stir up so much shit. He’s had a rough couple of years and he’s undeniably eating crow for bad decisions professionally and financially, but the force that Herzog refers to is hardly gone. Even once he is, will we stop watching his movies?