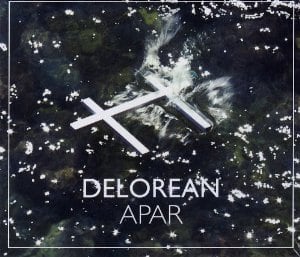 [xrr rating=2.25/5]Three years removed from Subiza, Spain’s Delorean now possess an unexpected maturity. Formed around the ideals of creating a better night club experience in Barcelona, the four-piece’s indie rock productions have also been rife with the area’s energetic Balearic beat. With a new fondness for eloquent, non-augmented female vocals, Apar is the output of a collective that has formally moved on from this former youthful jubilance and is comfortable in their new lifestyle. But much like the transition from undergrad to full-fledged adult, this comfort comes at the expense of risky, yet fruitful, adventures.

Peering through this new subdued vibe, the basic elements of Delorean remain unchanged. Despite the attempts for duets, Ekhi Lopetegi is still largely unintelligible, odd instruments and chords still find their way into these more pristine arrangements and their appreciation for nostalgic electronic tones is as strong as ever—they did name themselves after a time-travelling car after all. While these elements don’t hit with the same electro euphoria as prior releases, Delorean seem convinced that their new arrangements actually course with more life. Lead single “Spirit” slowly builds on waves of operatic echoes, and after a sleek synthesizer melody pulls listeners back to the Reagan administration, Lopetegi can be heard (by those listening diligently enough) to be professing the growth that results from change. The song, much like the remainder of the album, is poppier than the band’s previous output. But without allowing the listener to effectively sing along or find some type of universal meaning, most tracks are lacking important elements of successful pop music.

Like the work of Sigur Rós, Björk and Grimes, Apar is most effective when it takes the emphasis off the meaning or pronunciation of the vocals and uses them more as sonic supplements to the instrumentals. “Destitute Time,” “Unhold” and “You Know It’s Right” are so powerful because the vocals wash into the ethereal soundscapes, encasing listeners into a cocoon of analog warmth. Conversely, Lopetegi’s lyrical meanderings within “Dominion” serve as a distraction to the track’s genre-bending electro-folk.

During this transition to a more pop-oriented sound, drummer Igor Escudeo simply isn’t required to attack the downbeats and hi-hats like he once had. Without a steady beat to emphasize the shifts in phrasing, the tracks blend into an easily ignored wall of sound. Although pleasing, there is just no depth once a melody is initially established. Aside from a classic rock guitar arrangement within “Walk High” and the disco-leaning opulence of album closer “Still You,” there is little substance in the latter half of the release.

Like a raver chick turned soccer mom, Apar is an overcorrection toward mature pop sensibilities. Lopetegi and company have no issue creating emotive and heartbreaking melodies; however, the shift from dance provocateurs to introspective songwriters is not easy. As a result, Apar exists in a void between the two. Everyone has to grow up, but it’s also imperative that we maintain a sense of self during this transformation—a notion lost during the recording of this project.