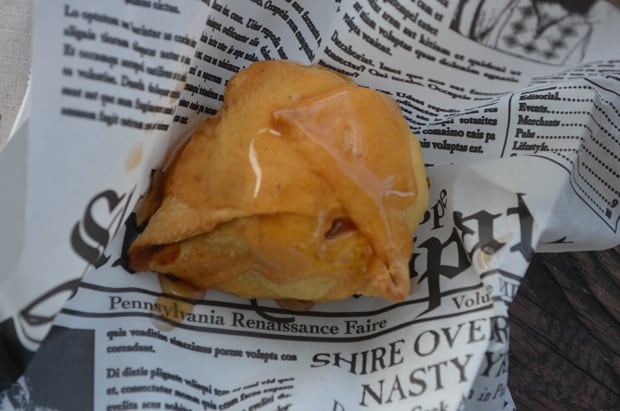 We’re at a point right now where the word artisanal doesn’t mean anything anymore. No, I’m not going to bore you with a food writer think piece on how wrong it is for Subway to call something artisanal. That is well worn ground. I was thinking a lot about that word, though, as we traveled through Pennsylvania’s Lancaster County this weekend. Lancaster is home to one of the largest Amish populations in the country. They are the locus of almost all of the tourist activity there. It would seem that you can’t drive 500 feet without passing a roadside stand selling their food, a sign advertising authentic horse-drawn buggy rides or a group of tourists gawking at their one-room schoolhouse. Much like the term “artisanal,” the Amish have also been conjoined to some god awful marketing and entertainment ventures in recent times. Lebanon Levi ring a bell? How about “Breaking Amish: LA?” That pile of dreck has the distinction of co-opting two really beautiful entities for the sake of something really bad.

Amish food is artisan food by the old, uncorrupted definition of the word. You won’t find it described that way though, it’s just a given. You are assuredly buying a homemade batch of cheddar or cider pressed from their own orchard because their lifestyle dictates that’s the way it should be done. Whether or not you agree with their tenets, they seem to have made peace with yours, and there is a relationship with the tourist economy that is mutually beneficial. They can subsidize their lifestyle and we can benefit from their handcrafted products. All good things get co-opted though. Nobody is mass-producing scrapple and pawning it off as Amish in your local supermarket. Yet. Given the odd prevalence of Amish reality shows, that just might be a matter of time. For now though it’s a delight to get lost on the country roads of Pennsylvania Dutch country in search of food that you can’t get anywhere else but there.

Scrapple is not exactly a sausage but close, and it’s not really charcuterie either. As I understand it, all the leftover bits or pork lying around post-butchering are cooked, combined with a binder like cornmeal and some spices, set into a loaf and cooled. From there it get sliced and pan-fried most commonly. That it looks very much like canned dog food shouldn’t deter you. When it’s made right it’s really delicious, akin to the best breakfast sausage you’ve ever had.

Not a typo there, there is actually a pie with the moniker shoofly. What exactly is it? A molasses based pie that is filled with boatloads of gooey sweetness and a topping that’s a combination of brown sugar and flour. It’s sold at every tourist trap, farm stand and country eatery in Lancaster, and be forewarned: not all are created equal. Some are mushy, sloppy messes. The best are able to maintain some sort of agreement between the filling and the topping whereby they don’t mix. I have no culinary explanation for how that happens. The pie made by the Kitchen Kettle, located in Intercourse (again, not a typo) is superior and my go-to place for shoofly pie every time we visit. The Kitchen Kettle village, a collection of various shops, is most definitely a tourist trap but a good one as those things go. There is a cannery that sells apple butter, a variety of salsas and chutneys on site. You can even watch the Amish women who prepare all of the goods on sale in their open kitchen. They were canning pickled beets when we visited. Across the way is a butcher that sells scrapple, bacon and smoked cheeses that are worth your time.

The best breakfast in Lancaster is located in a Best Western

The Olde Mill Restaurant is attached to the Best Western in Intercourse. Above the entrance to the hotel parking lot is a sign that declares Witness was filmed there. I love Harrison Ford as much as anyone but their claim to fame should be the recently remodeled restaurant that sits on the north side of the property.

A breakfast at the Inn is served in a portion that will probably hold you until dinner. Take the Amish Breakfast on the menu; it’s three eggs, a slab of country ham, toast, coffee and a piece of coffee cake after the proper breakfast that is roughly the size of a three-year-old child’s head. This is the place that I fell in love with scrapple many years ago before they renovated into the stone and vaulted ceiling motif.

There is a handmade sign along Route 340 next to a long driveway that reads “Homemade Root Beer.” That’s the only clue that you should go down that road and seek out that root beer. No roadside stand, no addition to the sign that says “available for purchase.” Other than the sign, it looks like any another rural farm. The property is actually home to Olde Heritage Root Beer. It would behoove you to go down this driveway and try this root beer. It takes a leap of faith, just like most other things in life worth doing. Just like the distance between Stumptown Coffee and McDonalds’s sludge is a canyon, so is this root beer to any other that you’ve tried in your life.

One could make a good argument that dividing point between the Eastern seaboard and the Rust Belt runs on a line through Lancaster, heading northwest to Buffalo, NY and southwest to West Virginia. The Pennsylvania Renaissance Faire is located on the northern edge of Lancaster County in Mt. Hope on the western side of that line. There were a lot of people wandering around in medieval garb un-ironically. Bad olde English accents and wenches and the pomp of a fake jousting tourney with too much setup for a bad punch line were only part of the entertainment. It wasn’t actually clear whether all of the medieval performers wandering the park were actually employees of the faire or just enthusiasts. The cynical East Coaster in me was taken by the fact that people enjoyed all of it without affectation. It must be nice to live with your guard down.

All snark aside, the food was worth the price of admission itself. We’re not going to talk about proper cooking techniques or fresh ingredients here or anything like that. That’s not to say that there wasn’t well-cooked food speaking in culinary terms. It’s just not the point. In short, there was booth after booth of insane carny food. Good bad food. The point is in the over-the-top abundance of it all. Smoked turkey legs were hawked out of well worn coolers for seven dollars apiece. Rumor had it that they were injected with ham fat prior to smoking and their flavor did nothing to dispel that. They were served wrapped in foil and seemed to be the most popular item at the faire. If a well-browned turkey leg wrapped in aluminum foil isn’t on the crest of Lancaster County then there should be a petition to change that. Baseball sized apple dumplings were served with warm cider next to a sand pit where you could challenge one another to a sword fight. The gooey apple topping attracted bees in droves. We shooed them away while we watched couples in heavy leather protective suits take out their frustrations on each other with some down-home medieval sword fighting. There were pies plated (or maybe constructed is a better term) using nothing but ice cream scoops. A scoop of seasoned chicken or beef, a generous scoop of mashed potatoes, a small scoop of peas and a scoop of gravy all into a small pie filling. If they had a food truck or a takeout window near me that simply served this, I’d eat it every day and put up with the extra weight I’d gain. And that right there is what makes it much easier to visit Lancaster than to live in it.