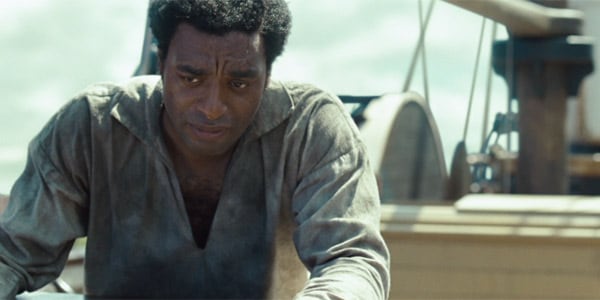 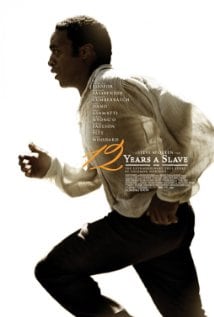 Solomon Northup spent most of his life as a free man, an educated violinist with his own home, property and family. But for twelve years he was exploited as little more than a tool, used to pick cotton, chop cane and nail boards into place. Taken from his upstate New York home by a pair of slave traders posing as musicians, he spends most of 12 Years a Slave struggling to retain shreds of that humanity, as his claims to individual dignity are successively beaten out of him. As in Toni Morrison’s Beloved, another crushing tale of characters struggling to uphold their humanity in the face of a dehumanizing culture, the film finds this formerly proud man at war with a system that insists on the total erasure of his established self.

The destruction of that self is first effected through illegal violence, with Solomon chained up in a makeshift prison, after which he’s ferried toward the dreaded slave markets of New Orleans. McQueen depicts the boat that takes him there as a dim world whose noisy moving parts are nonetheless clearly visible, indicating both Solomon’s descent into mechanized anonymity and the clanking system which perpetuates this process. It’s in this grim setting that Solomon – played with a masterful sense of pained restraint by Chiwetel Ejiofor – has any remaining illusions stripped bare. He and two other educated men conspire to escape, only to learn how fully the odds are stacked against them. They may have been free men in the north, the equal of any of the whites on board, but in this inverted world intelligence and education aren’t prideful qualities, they’re dangerous secrets to be hidden beneath a facade of animalistic simplicity.

The waking nightmare of the antebellum South becomes clearer as the individual pieces of its great machinery come into focus. Purchased by practical slave trader Freeman (Paul Giamatti), Solomon loses more of his identity, examined like a piece of livestock and rechristened as Platt. His first master is the sensible preacher Ford (Benedict Cumberbatch) whose obvious conscience and appreciation for his workers’ skills seems to run counter to his willingness to buy and sell human beings. Yet the idea here is how easy it is to accept such monstrous conditions once they’re established as societal constants. Just as Solomon’s descent into animalistic self-preservation becomes assured once he’s forced to survive rather than live, the self-perpetuating atrocity of slavery rolls along because no one even thinks to question it.

Yet as McQueen steadily reveals, no one is really free from its effects. Plagued by both the direct psychological effects and the broader social consequences of a foundation of forced human labor, the genteel South presented here is a velvet waistcoat thrown over a pile of shit. The intimate, inextricable relationship between the filth of the fields and the purity of the plantation house are neatly summed up in an early scene, where a grime-covered Solomon rests on a lily white, frilly pillow on the floor of his master’s house, hiding out after a lynching attempt.

The film’s main passage pushes even harder on this angle, as Solomon falls into the hands of the cruel, capricious Epps, whose mentally imbalanced behavior reveals the illogical insanity undergirding this entire arrangement. Played with spittle-flinging abandon by Michael Fassbender, the character recalls Donald Sutherland’s maniac foreman in Bertolucci’s 1900, completely corrupted and ruined by his power. Epps is the embodiment of all that festering at the heart of this monstrous system, the illogical adversary against whom Solomon is pitted in an increasingly desperate struggle to retain some scrap of residual humanity.

As its title reveals, 12 Years a Slave ends on a positive note, one which may be confused by some as inspirational. But any interpretation of the film’s conclusion as victorious or rousing ignores the immediate horror of everything McQueen has shown us. This is a searing indictment in prestige clothing, one whose message isn’t limited to any outmoded system of subjugation, but points toward any society that looks the other way while people suffer anonymously in its midst.