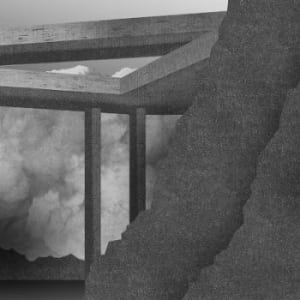 [xrr rating=3.0/5]Uncannily similar to last year’s Interstellar, Frankie Rose’s Herein Wild only hints at her messy retro-rock roots working the rhythm section of Vivian Girls, Crystal Stilts and the Dum Dum Girls. Rose’s newest solo record references music from a few decades later, the angular rhythms and generous atmosphere of the Cure meeting the languid glaze of Galaxie 500, though the occasional glimmering of Stereolab or M83 is harder to pinpoint than it was on her last. Rose’s dreampop is also unique among bands operating in the same space, less relaxing than it is tense, urgent and spotted with grain. Those stylistic touchstones contribute to Herein Wild ending up as a hazily sculpted record rendered in stunning watercolor strokes – less bold than Rose’s bratty garage projects, but capable of just as much impact.

The problem with Herein Wild, Rose’s third solo outing and second without the Outs, is that its fuzzy, percussion-heavy pop creates a dramatic atmosphere while it lasts, yet is surprisingly quick to fade away. The solid closers “Street of Dreams” (a surprisingly effective take on a 1985 song by the Damned) and “Requiem” make it a lot easier to remember how Herein Wild wraps up than it is to recall any particular song. Rose said of the album that she doesn’t just want to make pop music and hopes to record “long, weird” music like musical soundtracks and film scores. The few moments on Herein Wild that really stand out reflect this desire to explore more instrumental, orchestrated territory, as on the floating synth number that caps off “Street of Dreams” like some dire version of Tangerine Dream, or the trumpet-heralded ballad on “Requiem.” That final song’s inward-gazing take on the bitter end is a perfect match for delicate acoustic guitar strums that linger in the spacious mix, Rose singing “When I am old, I’ll be alone again and so/ Listening to my own voice by the sea…/ I’m afraid hell and heaven are the same…In the end things fall apart, herein wild.” Reminiscent of the Cure’s “The Forest,” “The Depths” features a bass-woven trance that spends more time stretching out that suspenseful groove than Rose does singing. When she does, she croons a lofty sigh before the refrain sculpts her voice into an angelic choir of multi-tracked cyborgs.

Still, Herein Wild spends a lot of time exploring what Interstellar did with a slightly less punky approach than its predecessor. This tendency towards rehashing makes Herein Wild a modest counterpart to Interstellar, notably superior as part of this pairing than when taken on its own, and full of similarly sophisticated pop tracks that occasionally feel a little bit redundant. Stunning opener “You for Me” kicks off with a pulse of garage-sized chords that throw off blasts of sustain, the song’s verse providing the first taste of Rose’s trademark vocal production, all airy and reverbed to perfection. “Minor Times” features swirling synths and barely-there “ba da da da” vocal backing, a sprightly drum beat superseded by Rose’s lush vocal flowing along at a much slower tempo. The staggered pacing highlights just how practiced Rose is at crafting this kind of pop song; it’s a subtle addition that makes the consistently lofty atmosphere of Rose’s melodies feel even more extended and fluid. Coming right before the album’s conclusion, “Heaven” is pulled taught by a frenzied guitar strum, each refrain bursting out into joyful multi-tracked vocals like a rubber band vibrating as it snaps back into place. While Herein Wild doesn’t quite advance Rose’s music in the way she seems to desire, it sounds familiar and practiced for the same reasons. The final three songs suggest Rose really is going to start moving away from dreamy pop as she exhausts the allure of those sounds, continuing to experiment with ornate orchestration and the kind of “weird” she’s only just begun to try out.