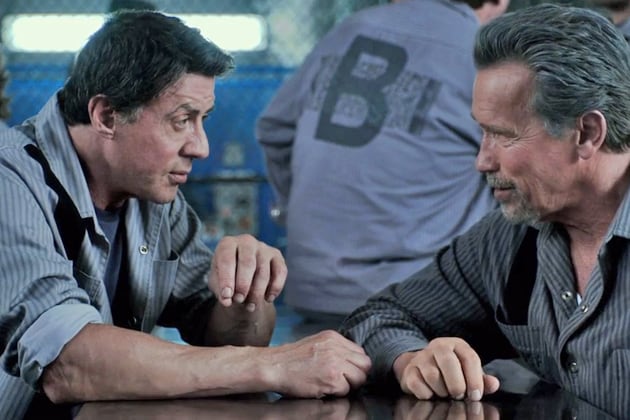 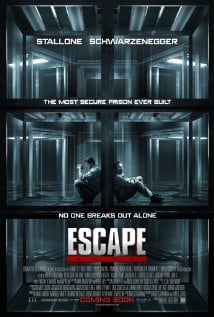 There is a glorious moment towards the end of Escape Plan, the clunky new thriller starring Sylvester Stallone and Arnold Schwarzenegger where the latter pulls a mounted machine gun off a helicopter, in slow motion naturally, and begins to blow away a cadre of enemies. It was the epiphanic instant I had been waiting for, a madeleine whisking me back to the days of my youth filled with the so-bad-it’s-good flickerings of Commando, Cobra and Red Heat. Unfortunately for Escape Plan, this is the only time it reaches that zenith.

Starring in a movie together for the first time, Stallone and Schwarzenegger aren’t trying to invent the wheel here, but Escape Plan reeks with a lackadaisical ennui that makes it difficult to truly enjoy. While director Mikael Håfström and writers Jason Keller and Miles Chapman wisely stay away from the nudge-nudge meta jokiness that often plagues modern films starring ‘80s actors, they have created a ham-fisted picture that could have benefited from some nuance and subtlety.

Stallone stars as a Ray Breslin, a prison break expert who goes undercover to figure out the flaws in maximum security facilities. At the start of the film, Breslin is hired by the CIA to ply his trade at a super hi-tech new facility designed to house “the worst of the worst,” a hellish prison where the guards wear black masks and the prisoners are housed in clear, cylindrical cells. Soon after he is incarcerated, Breslin discovers that he has been double-crossed and that he is locked up for real.

Escape Plan would have been extraordinarily dreary if it relied only on Stallone’s ultra-serious Breslin. The actor does nothing to instill the shreds of humanity that we’ve seen in past characters such as Rocky. Luckily, Schwarzenegger is on hand as Emil Rottmayer, a fellow inmate who immediately befriends the flustered Breslin. When compared to Stallone’s leaden presence, Schwarzenegger’s sly performance saves Escape Plan from being a total dog. If Stallone is all restraint and flexing jaw muscles, Schwarzenegger gives an unhinged performance, perhaps his best in decades. We can get behind Rottmayer and while Breslin is spouting nonsense about structural design and making sextants out of eyeglasses, Schwarzenegger is positively relishing the script’s few good one-liners. He even gets to act crazy and shout things in German.

On the bad side of the equation, Jim Cavaziel plays the stone-cold warden Hobbes (Leviathan probably has something to do with his character’s name), a man who has a lot to gain from Breslin’s incarceration. Given little to do, Cavaziel’s Hobbes slips into the faceless void of the villains that populated the films from the stars’ heyday. Vincent D’Onofrio appears as Stallone’s boss and Curtis “50 Cent” Jackson is horribly miscast as a techno-nerd looking to save Breslin.

For an action film, Escape Plan is a pretty ho-hum affair. The fistfights only occur sporadically and when they do, they aren’t very exciting. Stallone’s climactic showdown with Vinnie Jones’ sadistic guard is surprisingly brief and not thrilling. It’s only that glorious moment when Schwarzenegger, horribly outnumbered and sporting a giant-ass machine gun, elevates the pulse in Escape Plan. It could have been much worse, but settling for mediocre isn’t much better.