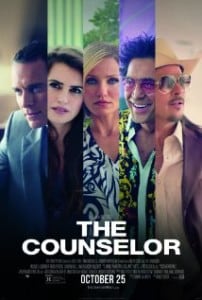 [xrr rating=3.75/5]Aglow with the radiant blush of privilege, Michael Fassbender’s Counselor in The Counselor is a consummate professional, decked out in expensive suits, conducting his mildly illicit business with a toothy smile. A character without a name, he glides through a world of criminals with inveterate ringmaster grace. At home he has a new fiancée (Penelope Cruz), to whom he seems wholeheartedly devoted. But like so many characters at the center of unspooling noir plots, The Counselor is greedy. Lured by the tremendous windfalls available to investors in cocaine trafficking, he dips a toe into the drug trade, planning to make a quick profit before hopping back to the straight and narrow. Reprisal is of course swift and unremitting, leaving The Counselor, at its core, the story of a desperate man receiving counsel from all manners of unsavory parties.

Working off a deliciously purple debut script from Cormac McCarthy, Ridley Scott delivers something exceedingly rare, an adult thriller that’s about words instead of actions, characters instead of set pieces. Befitting McCarthy’s taste for unexpected, baroque brutality, the film transitions quickly from an ordered world to one of colorful disaster, skipping the usual gradual descent into the criminal milieu. The Counselor has no actual contact with any of the drug world’s inner workings, and never even has the chance to get in over his head. Instead he’s struck down by a twist of fate which sabotages his investment before it’s even made, sending the machinery of an unnamed Mexican cartel clamping down on him with the sudden, steadfast efficiency of a bear trap.

There’s a scene in “The Sopranos” where a mob soldier explains execution procedure to one of Tony’s uncooperative mistresses: there’s no blaze of glory, no hail of bullets, you simply vanish. The cartel depicted here operates by a similarly stringent set of procedures; the only way anyone will even be aware of your death is if they’re interested in making a public statement. The combination of dense dialogue, intense grimness and implicitly relayed violence makes for a film which recalls the weary, existentially-tinged gangster flicks of the ‘70s. Penning what’s ostensibly his take on an Elmore Leonard story, McCarthy fully exposes the pulp leanings that have always lurked around the fringes of his highly literate novels. In those books monstrous acts are matched by ornate language, which stands in sharp contrast to the simple evil of the deeds committed. Here there’s a similar sense of characters burying evil beneath justifying speech; the dialogue is florid, but it fits. Like a Coen brothers movie without all the overt stylistic tics, The Counselor presents a vibrant stable of oddball characters who never tire of hearing themselves talk, and their facility in doing so adds a necessary layer of mordant humor to the proceedings.

This world of odd anecdotes and showy turns of phrase has its opposite in the chugging engine of the cartel. The scenes featuring its workings involve few familiar faces and little talking, instead focusing on pure process and movement. When damaged, the cartel’s drug pipeline, which traces from Colombia through Juarez and up as far as Chicago, repairs itself as quickly and quietly as Robert Patrick’s T-1000 in Terminator 2. This precision itself exists as another pulp touch, setting up an unstoppable adversary whose mechanistic effectiveness is a clear function of the plot’s steamroller consequences. That obviousness is buoyed by the flamboyance exhibited everywhere else, with Brad Pitt decked out in flashy cowboy suits, Javier Bardem sporting a magnificently bizarre coif, and Cameron Diaz splattered with cheetah-print tattoos. It’s never exactly clear what exact roles these characters play in the action, but it’s always evident that they’re up to no good.

Aside from a few visual flourishes, Scott mostly makes adequate room for all this eccentricity, imbuing the film with a generally professional pedigree and a consistent air of cool. The control exhibited eventually grows unnerving, the tone remaining icily consistent even as the Counselor’s world comes crashing down around him. This is a story that plays out in handsomely arrayed hotel lobbies, luxury apartments and poolside lounges, populated by professionals talking business over immaculately prepared cocktails. This doesn’t change as the action grows more grotesque, since violence is hardly alien to this world. It’s only another storm from which to take shelter, a deluge that our doomed protagonist isn’t remotely prepared to handle.