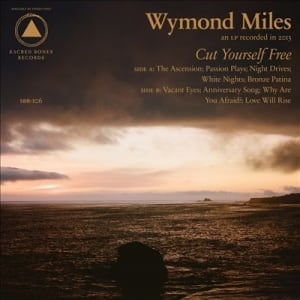 [xrr rating=2.75/5]Everybody knows that first impressions are important. With short attention spans, people are quick to categorize and move on. Sometimes, those kneejerk responses are spot-on and sometimes they miss the mark. Either way, there’s rarely a chance to reset expectations after that initial impact. On Cut Yourself Free, guitarist Wymond Miles goes out of his way to create the image of a dark, Goth-pop wallflower. He wraps himself in a worn shroud of reverb and emulates Robert Smith’s singing style. Maybe he’s intent on distinguishing his solo work from the cheerier garage rock he plays with the Fresh & Onlys, but he does himself a disservice by pigeonholing his sound.

The first three songs on Cut Yourself Free are not so much a love letter to the Cure as a sympathetic LiveJournal lamentation. Leading off with “The Ascension,” Miles teases us with alt rock guitar downstrokes wrapped in what will become the album’s ubiquitous haze of echo. As the cycle of chords becomes a repetitive loop, the extended introduction gets more interesting, incorporating keyboard swells and honed shards of guitar. This retro new wave vamp eventually gives way to the main song, a sparse tribute to the Cure featuring glum, hollow vocals. By the synthpop shimmer of the third track, Miles has established the album as an echo-laden miasma of emo brooding worthy of his Gothic inspirations.

That’s what makes “White Nights” such an unexpected pleasure. On the early tracks, the guitars strained to break free and explore more expansive reaches with enthusiastic jangle and expressiveness. Finally, they get their chance as Miles backslides to a mood more fitting to his work with the Fresh & Onlys. The sound is buoyed by the XTC pop and new wave backing. The vocals even transform from oppressive to thoughtful. The meandering melody in the fade out deserves more space than it gets, but it’s pleasant enough to get a disruption in the gloomy flow. The brief instrumental interlude that follows, “Bronze Patina,” very nearly recants those first tunes completely. Shimmering walls of heat-struck guitar drone hover like a nearby mirage, carefully framing a dulcet acoustic guitar. The bristling howl of chaos is cast against the rooted faith of sweetly simple finger picking, without resolution. Instead, a yin-yang balance prevails.

Cut Yourself Free doesn’t abandon its dark foundations at that point, but the second half breaks up the monochrome. “Anniversary Song” is packed with melodramatic suffering, but other songs have more to offer. “Vacant Eyes” clings to some Gothic shadows, but it gives free rein to a pensive psychedelia reminiscent of the Moody Blues. “Love Will Rise” is a bit stilted, but the tremolo guitar blends with the synth washes to add an intriguing retro feel. Introducing these richer sounds from the start would have improved the album’s appeal. Leading off with such a derivative sonic palette created a momentum that wears out its welcome all too soon. Despite his talent on the guitar, Miles can’t overcome that first impression.