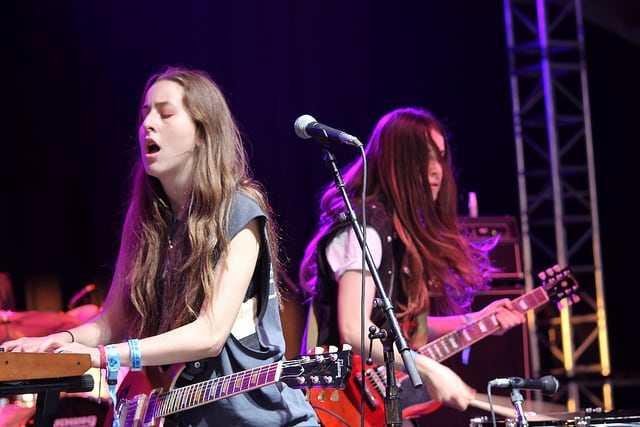 Just how big and buzzy is Haim right now? People begged for tickets outside of Portland’s 300-person capacity Mississippi Studios, Sony took advantage of the room’s sterling acoustics to record a live album and members of the press had their +1s stripped away at the last minute. Kudos to the promoters for not being greedy and moving the show to some larger, hollow venue to squeeze in as many of the groundlings as possible. The air crackled. The guy next to me equated the energy to the time he saw The Strokes the week Is This It came out.

Before the Haim sisters took the stage, openers Io Echo warmed up the crowd with a 30 minute set featuring songs from debut album, Ministry of Love. The Los Angeles band combines the dark temperaments of Zola Jesus and Nine Inch Nails with Asian sounds such as the koto. That influence carried over to the live show as shoji screens flanked the band and singer Ioanna Gika wore a kimono during the performance. Some could call cultural malapropism as they are a bunch of white folks from LA, but for the most part the meld worked, especially with songs titled “Shanghai Girls” and “Tiananmen Square.”

Cloaked by dim lights, Gika’s performance matched the moody material as she hid her face behind fans and swirled her kimono. The inclusion of a straight-forward reading of the Beatles “I Want You (She’s So Heavy)” was an interesting choice, a sultry rocker to break up the band’s own more atmospheric pieces. The crowd, clearly at the club to see the ascendant Haim, politely listened to Io Echo, cheering and singing along to the Beatles cover.

The sisters of Haim came next, appearing a little after 10pm and vanishing for good after a brisk, 45 minute set. Cherry-picking from Days are Gone, the sisters also covered Fleetwood Mac’s “Oh Well,” rounding out a scant eight-song set. In the live setting, raw edges crept into Haim’s music, giving more of an edge to the honeyed sounds of Stevie Nicks and Phil Collins that inform much of the songs on their much-lauded debut. So while songs such as “Falling” and “The Wire” can sound infectious, if not a little glossed-over, on record, the live version breathed with a more invigorated sound.

Each of the Haim sisters played their part during the show. Vocalist Danielle was the quiet, mysterious one, bassist and eldest sister Este took control of most of the stage banter which included quips about obscure pop culture references and the obligatory deference to Portland’s cool vibe and heavily praised restaurant scene. Keyboardist Alana, who Este constantly called “Baby Haim,” came across as the bubbly sidekick. The sisters’ Jewish roots also influenced the performance, ringing through not only in the talk of Hanukkah but how the sisters interacting with one another.

After playing through the three songs mentioned above, “Honey & I,” “Go Slow” and a majestic reading of “Don’t Save Me,” the sisters finished the first set with “Forever.” They quickly returned and played “Let Me Go” before retreating backstage. It was a strong performance, but it felt like a teaser. I have no doubt that Haim will be back in town soon and not a single one of us in that room will ever see them in a venue that small again.