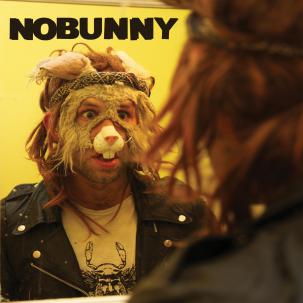 [xrr rating=3.75/5]Beyond the unusually wordy title, Secret Songs: Reflections from the Ear Mirror utilizes the same scrappy garage-rock formula Nobunny is known for. Justin Champlin still dons that filthy rabbit mask onstage – often wearing very little else as he delivers brash and sweet party-rock cuts – and his second Goner Records release changes very little about what makes Nobunny a shockingly consistent act. Shocking, because this style has never offered much room for variation, and Nobunny seems to make territory thoroughly explored by the Ramones, the Cramps and the like-minded folks on Burger records newly exciting and lovable, one album after another.

On 2010’s First Blood, Champlin proved he could retain the unhinged aesthetic of his first two records while injecting a hodgepodge of styles into the mix, at the same time making the whole affair sound as clean and professional as music made by a naked dude in a rabbit mask can get. Secret Songs manages to jump around even more, careening from one style to another with the force and speed of a pinball riding out the bumpers. On First Blood Nobunny strung together power-pop, shredded country twang, or clown music (“I Was On (The Bozo Show)”), but Secret Songs mashes 14 flavors of garage-rock into just under 30 minutes, ranging from glammy shakers and sashaying love songs to whistling bubblegum and grimy punk. It would be a jumbled mess if Champlin’s numerous hooks weren’t so effective. Whether channeling the Misfits or Wreckless Eric, Nobunny has a song that fits, and his frenzied delivery makes these songs seem almost reverent in their gleeful sincerity.

That’s one reason why Secret Songs succeeds at being the most scuzzy, crinkled, uncomfortably-charismatic Nobunny record to date. For the first time, Champlin has created an album that sounds and feels like it’s delivered entirely from the perspective of that crusty leather and mask-wearing punkster. Instead of being merely an image attached to Champlin’s stage persona, Nobunny is the junior Aqualung type in “Rotten Sweet Tooth,” channeling a sexist lust for any lady within a block radius on “Pretty Girls” (a cleverly appropriated cover of the Kids of Widney High song) or showing his charming side on “The Birthday Girl.” Even though Champlin can write more traditionally polished pop-punk gems (like the urgently strummed opener “Bye Bye Roxie”), Secret Songs is regularly ragged-edged, and Champlin purposely favors toss-off vocals and interjected whoops or shrieks. On “Pretty Girls” he finishes his sped-up punk version of the song with a clamoring group vocal and a bunch of random noise; “It’s Pathetic” is growled out like a tantrum; “Do The Stooge” is a whirling tangle of raving sing-speak vocals (rama-lama-ding-dong, gabba gabba hey, good god damn) and flat jangly drums; “Little Bo Bitch” swings delightfully, Champlin singing like Bon Scott on a bender.

Many of these songs are also lyrically darker than earlier Nobunny cuts. Hiding behind his grime-soaked mask while performing, it’s next to impossible to catch all of Champlin’s vocals, even though that’s what makes his simplistic, genre-appropriate songs shine. Secret Songs matches Nobunny’s dirty, scratched-up vocal delivery with the kind of seedy themes the Nobunny character embodies with gusto, some more sinister than others. “Rotten Sweet Tooth” might just be the catchiest song Champlin’s ever written, but it’s probably the creepiest love song he’s penned as well (“If I still had sugar and I still had you/ But they’d only keep one and I had to choose/ I wouldn’t mind, no I wouldn’t hesitate/ I’d choose my baby though sugar was great.”) It’s easy to picture Nobunny bouncing around singing the refrain, “And I swear I don’t miss it/ Except when I do/ I’m a dirty old man/ With a rotten sweet tooth.” Both “Little Bo Bitch” and “It’s Pathetic” smear reputations and condemn their targets with sharp-tongued zeal while “True Vulture,” a jangly peppy-sounding rocker, literally includes the line “Every time a baby dies, and every politician lies, I’m pretty sure that you’re nearby.” Whether lovably sweet or downright venomous, Secret Songs is a perfect distillation of what defines Nobunny’s skeezy fun.