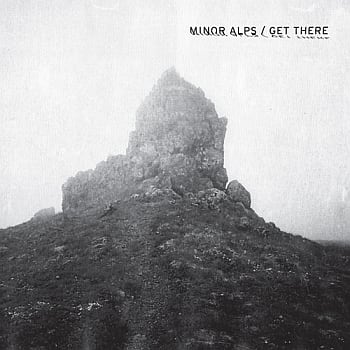 [xrr rating=3.0/5]The song “Radio Static” opens with the lines “All the things that I’ve done wrong/ For every one, a hundred songs,” Juliana Hatfield and Nada Surf frontman Matthew Caws singing together. Considering each of the principals collaborating under the name Minor Alps have indie cred music careers that stretch back around 25 years (including Hatfield’s tenure with the Blake Babies and Caws’ time with the obscure, fantastic Cost of Living), that hundred songs estimate might be a tad low. It’s been ages since Hatfield could grace the cover of a national music magazine, but she’s still been prolific, releasing albums at an almost yearly clip. At the same time, Nada Surf is practically the embodiment of a cult band, soldiering on with a fan base just strong enough to support them, nary a thought of a major commercial breakthrough on the horizon. Given that each of them has created some fairly personal music over the years, compiling the melodic reports of their respective transgressions in 7-inch form could very well yield a tower that stretches to the stratosphere.

Get There, the first album credited to Minor Alps, is unsurprisingly familiar. Hatfield and Caws could have taken the occasion of their first significant collaboration to seek out ambitious reinvention. Instead, the album sounds like it’s made of elements found exclusively in the part of the Venn diagram where their creative circles overlap. It features a brand of slightly buzzy pop-rock that was prevalent on college radio back at the beginning of the 1990s, before the grunge revolution gave earnest tunefulness the scorched earth treatment. Aside from the occasional instance of sudden punchy energy (such as “Mixed Feelings,” which could have been pulled from an old record by the Connells), {Get There} is fairly languid, even easygoing. It sometimes seems like Minor Alps is angling for nothing much more ambitious than to be the coolest kids on the local adult album alternative station, expecting, probably correctly, that the loping agitation of “I Don’t Know What to Do with My Hands” or the flinty “If I Wanted Trouble” is going to leave folks just rattled enough if it shows up between Dave Matthews and Grace Potter.

There’s something about the wistful melancholy of the songs—in both the lyrics and the sweetly downbeat music—that makes the whole album seem like faintly remembered dispatches of twentysomething angst. There are details throughout—or, to be accurate, maybe just a tone—that feel more appropriate for songwriters still of the age of post-collegiate confused emotions than a couple music biz veterans closer to 50 than 40. There’s nothing wrong with that, per se, but it does sap some of the urgency from the album, which becomes a bit more of an issue when the vocals are calibrated to Hatfield’s trademark adorable disaffectedness. Or maybe it’s simply that the collaboration was almost too simpatico, with Hatfield and Caws reportedly writing the songs together in jolts of productivity that were marked by pleasure at how well they were able to intertwine their styles. It lacks the clash and friction of a truly great creative give-and-take. It’s still agreeable and even occasionally charming, especially for those who might harbor lingering affection for one or both of the performers. But in the end, the best assessment of Get There can be found in the repeated line in album closer “Waiting for You”: “Okay, I guess.”