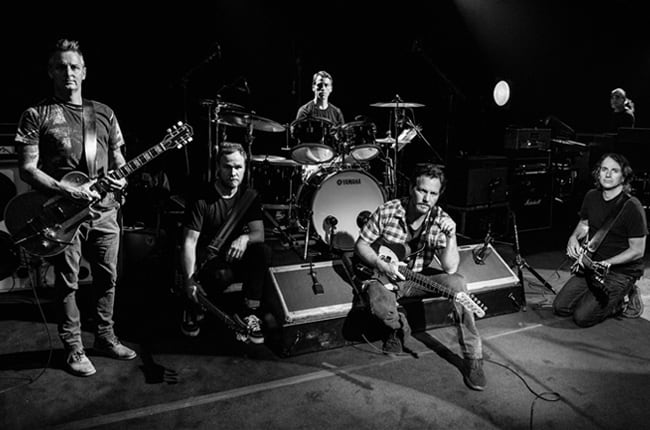 Excluding an election show in Asheville in 2004, it had been over 10 years since Pearl Jam played a note of music in the state of North Carolina. Needless to say, the crowd in Charlotte waited in eager anticipation for the finale of the East Coast leg of the band’s most substantial North American tour in some time. What many in the crowd already knew, however, was that the evening before in Charlottesville, Virginia, Pearl Jam played one of the best shows of their career. For a band that mixes things up night-to-night and builds their set around everything from that day’s news to the crowd’s vibe, there was no way for a fairly non-descript city to match of the energy of an on-campus venue. Not that the band didn’t try.

The interesting thing about a Pearl Jam show is that they are simultaneously playing to two audiences. There are those that follow every move Eddie Vedder and crew make, tracking setlists and roving from city to city on a virtual scavenger hunt in hopes of the band unleashing a rarity. Then, of course, there are those that want to make sure they don’t leave without hearing “Alive.” The band does an admirable job of addressing both groups, and due to either the deep cuts and covers of the night before or the pronounced gap between area appearances, the Charlotte set felt a little more straightforward than most and leaned more toward the latter.

One thing Pearl Jam does better than just about every other touring band is that they recognize that every show they play is a chapter of their story, and each individual show is a document for those in attendance. They don’t just pull into town and push play they put on a performance for that night, for that crowd, for that city. Even when Pearl Jam plays radio-friendly songs, the band is as in the present as anyone, making each take unique. Guitarist Mike McCready’s solo during “Even Flow” varies nightly, with this evening’s version a soaring combination of trippy modes and ferocious blues stabs (he also crushed it during “Immortality”). “Daughter” broke down into an improvised call-and-response between Vedder and the audience featuring “Blitzkrieg Bop” and George Clinton’s “Atomic Dog,” and “Better Man” found the sweat-drenched Vedder teasing the crowd vocally. Of the favorites, nothing felt more fresh than “Porch,” a funky, jammy take with McCready and bassist Jeff Ament swinging the stage’s enlarged neon green light bulbs over the audience and dodging them as they swayed back (McCready, looking more fit and trim than ever, even paused to take Polaroids of the audience).

Favorites aside, it wouldn’t be a Pearl Jam show if there weren’t at least a few surprises. The deepest grab likely came at the start of the first encore when Vedder and Ament took a seat side-by-side for the Lost Dogs finale, “Bee Girl.” “Low Light,” “Present Tense” and Backspacer’s “Unknown Thought” were also nice adds to the set, but with Pearl Jam, what happens between the songs can be as memorable. Before launching into the ecstatically received live debut of the just-released Lightning Bolt’s opener, “Getaway,” Vedder took the opportunity to announce that the record remained at number one for the second consecutive week, “and we didn’t even have to show our tits.” Guitarist Stone Gossard then playfully proceeded to lift his shirt, revealing his own pair.

The element of surprise at a rock ‘n’ roll show has fallen largely by the wayside. Pearl Jam has achieved a point in their career where they have both the canon and the comfort to do whatever they want yet they consistently challenge themselves and their audience night after night. Charlotte wasn’t the best show they’ve ever played, but you never knew what was coming next, and that’s still pretty damn exciting. When you choose spontaneity over predictability, you won’t uncover treasure every night. But with Pearl Jam, it’s as much the journey as it is the destination.