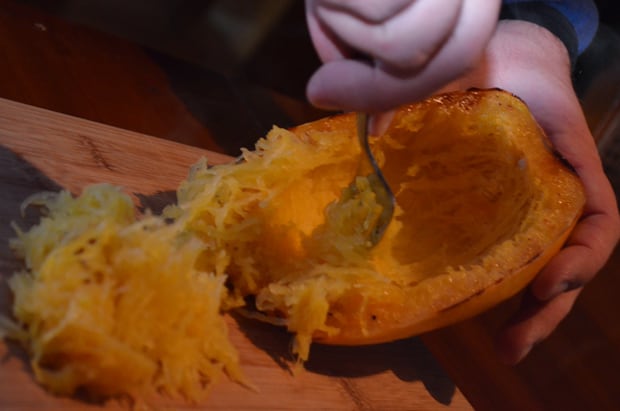 Spaghetti squash is a winter squash and usually among the last new items to arrive in the farmers markets in New York before they close up shop for the winter. It’s arrival means that short days and long nights are coming, temperatures are dropping and seasonal produce from there on out will be limited to a lot of root vegetables. Despite all the depressing things that are timed right to the ripening of the squash, it’s still a happy sight to see it at the market. Unlike some of its brethren (I’m looking at you, butternut), its applications go beyond simply roasting it or pureeing it into a soup. In Spain it is called cabello de angel or angels hair, but not for an association that you might think of. It is often served candied as a dessert, first roasted and then sweetened with honey, sugar and lemon zest and cooked into a paste and then a pastry. It’s a complicated process and while I’m sure it worth it, were going to take a different direction albeit one that would be appropriate to the angel hair nickname.

The flesh of spaghetti squash when scraped away with a fork bears an uncanny resemblance to angel hair pasta, hence the name. It’s not just in the looks, it makes an excellent substitute for pasta. Paired below with a tomato and fennel sauce, the angels hair is not quite the real thing. You won’t ever mistake the over-stuffed feeling of carb-loading on regular pasta for the shards of squash that make for its substitute. You also won’t have to loosen your belt though either and you’ll be able to tell your friends you did something other than making soup for the thousandth time with a winter squash. That fact alone might make it worth giving spaghetti squash a try.

Preheat the oven to 375 degrees. Season the squash with salt and pepper, drizzle with the olive oil and honey and place the cut sides down on a roasting pan. Put in the oven and roast for 40 minutes. Once the squash has cooled, scrape the flesh lengthwise from one end to the other. The flesh will split away and have the texture of al dente pasta.

Heat a large skillet over medium heat and put the olive oil in the skillet. Once the oil had heated up, put the fennel and onion in the skillet and cook until it has softened, about 5-8 minutes. Add the tomatoes, turn the heat to medium low and cook until the tomatoes start to break apart, about 10 minutes. You can prod them with a wooden spoon to aid this process if it starts to take too long. Add the mustard, capers, wine and season with salt and pepper. Let the sauce come to a boil and the wine reduce for about 5 minutes. Add the scraped flesh of the squash and gently fold into the sauce. Serve immediately.

[xrr rating=2.5/5]The toughest thing to swallow about the still unsolved case of the Long …