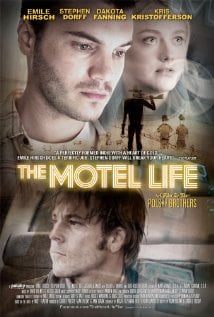 Brothers Frank (Emile Hirsch) and Jerry Lee (Stephen Dorff) like to tell and illustrate stories about adventure and heroics and busty women who are turned on by their heroic adventures, or maybe just turned on. The Flannigan brothers have the kind of fantasy life typical of adolescent boys, a welcome escape from their bleak adult lives: Jerry Lee lost part of a leg in a childhood accident, and the men live in a seedy motel in Reno.

Brothers Alan and Gabe Polsky picked a story about two down-and-out brothers for their directorial debut. If they’re not as error-prone as their fictional siblings, their first film is not a winner. But they show promise, and I hope they get a better script next time. The Polskys coax good performances out of their two leads despite miscasting: the brothers are supposed to be just a few years apart in age, but Dorff is a dozen years older than Hirsch and looks it.

The Polksys’ adaptation of the novel by alt-country rocker Willy Vlautin is a beautifully photographed study of adult men trapped by teenage dreams that leave them completely unprepared to deal with the real world. Cinematographer Roman Vasyanov, whose father shot propaganda pictures for the USSR, gives the movie a suitably bleak look, with the feel of Edward Hopper filtered through snow and cheap motels. The brothers Polsky for the most part maintain strong control of the melancholy tone of the brothers’ relationship.

Then there’s the script. “Six months after your mother died …” That’s the kind of expository dialogue that used-car salesman Earl Hurley (Kris Kristofferson) spits out to provide temporal context, and in a movie where atmosphere is everything, it ruins the mood. The script by Micah Fitzerman-Blue and Noah Harpster takes Jerry Lee’s drawing skills from the novel and expands them into an excuse for Mike Smith’s animated sequences.

In Vlautin’s book, Jerry Lee liked to draw naked women of Russ Meyerian proportions, sure, but the body of his drawing work was as much a documentation as anything. As suits the book’s title, Jerry Lee liked to draw the old motels of Reno, with names like the Ho Hum, the Lucky and the Heart O’Town. The list goes on for dozens of names, and it suggests a different kind of movie, one in which nighttime drives past dying motel strips evoke the sadness of a transient lifestyle infested with bedbugs. The Motel Life sets up its divided tone almost immediately, transporting us from a run-down motel room to the brother’s dreams. But the animation pulls us out of the bleak old-school milieu that Vlautin’s prose sets up. The movie escapes itself before it has even had a chance to establish its mood and ideas.

I blame the screenwriters more than the directors. For example, there is not much the Polskys can do with an unconvincing casino side-plot in which Frank and his friends bet on a Mike Tyson fight. This sidebar suffers from unconvincing comic relief thanks in part to bad acting on the part of Harpster. This episode is not the only plot element that leads to confusion. The film’s major premise revolves around leaving the scene of a hit and run, which only digs the brothers deeper into trouble.

The Motel Life could have overcome the flawed script if the Polskys had just maintained a single tone. The movie is at its best when it evokes the neon underbelly of America. When the Polskys convey the wandering tone of an Edward Hopperesque road movie, their movie works, and earns the aimlessness of the grizzled country-rock soundtrack. But their movie too often veers from the road by misguided design.

Much of Mirage Mirage has a sunny feel, but there’s a somber undercurrent. …