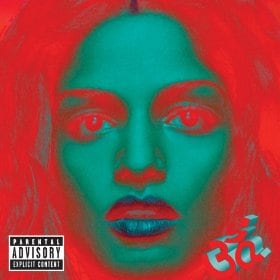 [xrr rating=3.5/5]Much as I miss the tactile pleasure of dropping a needle on a spinning black disc or even loading up a CD player, more modern methods of sampling new music can yield revelatory results. My review copy of M.I.A.’s new album, Matangi, arrived as a batch of audio files. As I loaded them one by one into iTunes, I neglected to turn the shuffle feature off, sending each post-song segue into wormholes across my digitized collection. Almost without exception, the next track—be it from Jack White, ‘70s soul trio the Honey Cone, Captain Beefheart or Fats Waller—bumped up against the M.I.A. song in a wholly comfortable way. I doubt I would have landed on any of those artists as comparisons if left to my own powers of musical association, and I actually don’t think there’s a hugely helpful sonic corollary in that list. Instead, what it represents to me is the massive amount of sound M.I.A. builds into every track, the cascading, continually evolving elements that can make just about any song into the stealth common denominator of a mix. She’d always melded genres, befitting her own identity as a London-born woman of Sri Lankan descent, but Matangi is often a whole different stew. It is dizzying, thrilling, exhausting and more than a little bit frustrating.

The partially fan-sourced title to the album (A.I.M. was another possibility on the docket) refers to the Hindu goddess of the spoken word and supernatural powers who is M.I.A.’s namesake (her given name is Mathangi Arulpragasam). After the middling response to her last album, M.I.A. reportedly dug deeper into the story of the goddess, even traveling to India as part of the quest to get her creative energies churning again. Some of that clearly informs the album, with thematic invocations of reincarnation, rebirth and other spiritual concepts laced together with her usual militant counter-attack on current social issues and the codified injustices of the world. She tends towards glancing blows rather than in-depth exploration of any given topic, but that’s arguably for the best, preventing the album from becoming didactic. Make music into too much of a treatise and the result is Sting singing about Russians in the 1980s. No one needs that.

On the title track, M.I.A. announces, “If you’re gonna be me, you need a manifesto/ If you ain’t got one, you better get one, presto.” That reflects an urgency that burns through everything she does, which can read as impetuous but never anything less than heartfelt. Driven by a racing, electrified beat, “Warriors” is a furiously enticing statement of power, with M.I.A. warning, “Come take a ride/ Light the city up, city up, city up/ You’ve got me fired up” before later noting, “This time I come as singer/ Next time I’ll come as pain.” Her costly middle finger is invoked too (the NFL is presumably still awaiting the $1.5 million they’ve requested in compensation for her Super Bowl halftime transgression), as M.I.A. continually toys with her image and her swelling notoriety. When she takes a line of the spectacular, explosive single “Bring the Noize” to insist, “Truth is like a rotten tooth, you gotta spit it out,” it is as plain an expression of personal wherewithal as she needs. She may be a controversial figure on some quarters (and may indeed cultivate that controversy because, in the end, it’s good for business), but she need offer no apology for being herself and rapping it like she sees it.

Given her outsized ambition and delirious willingness to heap her music high with different dynamics, it’s almost assured that there’s going to be some unevenness spread across an entire album. With it’s comparatively inane lyrics (“There’s a thousand ways to make it count/ There is nothing that can touch me now/ You can’t even break me down”) and straightforward production, “Come Walk with Me” sounds like what might result if Katy Perry decided she wanted a “mee-Ah kinda song” on one of her albums, which might be the meanest insult I can hurl the album’s way. (I will allow that M.I.A. could be playing a satiric long game here, given that the lyrics, “You ain’t gotta shake it, just be with me/ You ain’t gotta throw your hands in the air/ ‘Cos tonight we ain’t acting like we don’t care” are a complete subversion of the party empowerment theme that characterizes most modern pop hits.) Then there’s “aTENTion,” which apparently included a contribution from Julian Assange, scouring the internet to give M.I.A. a list of every word with the syllable “tent” in it, leading to a laundry list of a song with a computer-voice “tent” inserted in place of M.I.A.’s voice on each usage (“The fullest attempt in my inTENT/ Is to let you know what is important”). It just proves that wholesale dumps of information might be useful for exposing the underbelly of geopolitical posturing, but it makes for lousy creativity.

At her very best, M.I.A. is in a dialogue with the entirety of the culture, whether it manifests as rebuking the annoying acronym “YOLO” with “Y.A.L.A.” (which stands for “You Always Live Again” and does the universe the service of namechecking Julianne Moore in a rap song) or the anti-materialism of slinky, soulful album closer “Sexodus.” She’s an artist who resolutely refuses to conform to expectations or otherwise be put in her place, following her instincts with a fierce fervor. If that occasionally sends her peeling down a couple blind alleys, so be it. Crashes have a certain beauty, too. And there’s nothing quite like the thrilling rev of someone who is prepared to race toward the horizon line, sure she can outrace the turning of the Earth to reach the very edge. Matangi makes one thing clear: M.I.A. isn’t afraid to go anywhere.