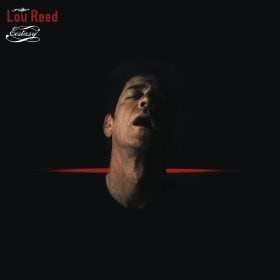 In the wake of Lou Reed’s passing, many music fans have taken the time to revisit the influential rocker’s lengthy discography. A pivotal member of the experimental rock community since the mid-‘60s, Reed hasn’t let more than four years slip by in the last four decades without sharing his thoughts on drugs, love, death and all things that roll through our minds as we toss restlessly at 3:30 in the morning. This daunting release schedule may have led to more than 20 full-length LPs, yet it is his work as the frontman of the Velvet Underground and his ‘70’s glam rock output that understandably receives the bulk of attention from an enduring fanbase. Following a hit-and-miss decade during the ’90s, the change of millennia was marked with one of Reed’s most dark and depressing testimonials—a heavy statement given Reed’s historically candid songwriting—entitled Ecstasy.

The album cover offers an honest visual manifestation of the recording’s anguish-laden material. Containing a photo taken by the musician himself, the cover finds Reed in a moment of pure rawness—no time allotted for proper light setup, no stylists or assistants determined to get the perfect shot, no editing to remove the wrinkles that indicate the wisdom that is only available to those who have fought to survive themselves. Ecstasy embodies a similar aesthetic. A concept album about Reed’s former marriages and relationships, the 14 tracks are poetic introspections that often run haphazardly through a foundation of adventurous blues arrangements. Trading a proper meter and rhyme scheme for soul-piercing honesty, there is a profound power in Reed’s ability to compete against his walls of drone with such humble messages.

By the year 2000, Reed was already publicly associated with future-wife Laurie Anderson. This connection seemingly allowed Reed to truly recollect about the issues of his former relationships. While the acoustic serenity turned electro-brooding of “Tatters” sheds light on a pairing that just sputtered to a conclusion, Reed is unapologetic about his adultery during “Mad.” Like a bratty kid, Reed isn’t sad he hurt his significant other, he’s just pissed that he got caught: an ardent self-reflection from a man already old enough to have registered for AARP.

Reed can be heard accepting his age throughout Ecstasy. On the orchestral-tinged “Baton Rouge,” Reed spends the track reminiscing on a tumultuous divorce and actually questioning “what if?”— a foreign ideal from a songwriter who barely managed to survive the drug-riddled years of his career. And on “Modern Dance,” Reed opens up about his inability to date and find love in a new era: “Or maybe I should just learn a modern dance/ Where roles are shifting the modern dance/ You never touch you don’t know who you’re with…”

Not all of the imagery within Ecstasy is so clear, or even fits within the album’s overall concept. “Future Farmers of America” definitely rocks, but sounds like the narrative of a beleaguered slave. At over 18-minutes long “Like a Possum” is more a practice of stream-of-consciousness poetry than a completely congealed piece of artwork. However, the elongated droning guitars, Reed’s unintelligible lyrical meandering and intermittent feedback is still far more listenable than the most experimental of Reed endeavors like Metal Machine Music.

Despite all the pain that lines the release, it ends with limitless positivity. “Big Sky” approaches a campy sing-along in its delivery, but after sharing in Reed’s depression for over an hour, it’s spiritually moving to come out celebrating the possibilities of a more unified tomorrow.

Ecstasy is certainly not the greatest of Reed’s releases, but it lands during a precarious time in his career. Not fully ready to commit to growing old with Anderson or record obligatory late-career collaborations, Reed delivers the type of off-the-cuff interplay that is reserved for true legends within the industry, the type of tracks that further revealed the character of an idol, innovator and antihero. Reed never asks for forgiveness or supplies a moral to these stories, he just uses the soundscapes to objectively reflect on his romantic tribulations—a series of errors that all those who have attempted to love can grasp on some level.