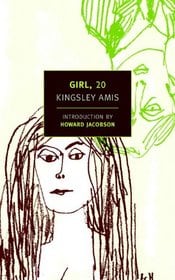 [xrr rating=3.0/5]Trust a Kingsley Amis novel to position its most sympathetic and interesting character as the central object of criticism. Amis’s Girl, 20 is a wholehearted sendup of 1960s youth culture through a critique of a once well-respected conductor trying to insinuate himself into the counterculture. For those like me who found Lucky Jim (the novel that Amis is best known for) completely unfunny, the reissue of Girl, 20 comes as a welcome surprise and a frequently hilarious satire.

This takedown of Amis’s sellout of a conductor, Sir Roy Vandervane, is narrated by the much younger yet doubly more conservative classical music critic Douglas Yandell. As a narrator, Douglas is ideal. He’s sympathetic to all of the conflicting needs of his friends: Sir Roy’s middle-aged philandering, his wife’s desire for a stable home life and Penny’s disgust for her father. And each of these people uses Douglas for their own ends, beginning with Sir Roy asking him to go on a double date with his own latest hippie girlfriend, Sylvia, and Penny. Somehow, having Douglas and Penny along would minimize the palpable scandal surrounding Sir Roy and Sylvia. Not that affairs are anything new in his life. Kitty, his current wife, was herself once a younger girlfriend pulling Sir Roy away from a marriage. The problem is that Sir Roy continues to chase after younger and younger girls. Kitty has an only semi-sarcastic theory on where this will ultimately lead: “…they’ve been running at about twenty to twenty-six over the last three years or so. Tending to go down. Getting younger at something like half the rate he gets older. When he’s seventy-three they’ll be ten.”

In this case, the Girl, 20 of the title is actually Girl, 17, and the teenage Sylvia is a completely abhorrent character. Her behavior is all shock and awe, and no one—not even Sir Roy, if he is being perfectly honest—wants to be around her.

Amis’s strong point as a writer is his ability to craft such complex characters, even in a satire like Girl, 20 that relies so heavily on stereotypes. Even Douglas, who is held up as the moral compass for Sir Roy and the novel itself, has a much more complicated morality. He can hardly criticize Sir Roy for his dalliances when he has his own dubious arrangement sharing his girlfriend, Vivienne, with another man. Add to this arrangement a one-night stand with Penny, and Douglas is no better than Sir Roy. The only truly likeable character is Penny, and she brings a very sobering twist to the novel’s final chapter, announcing her desire to develop a heroin addiction and die.

The absurdities of the era lend themselves to some ridiculous situations. The desperately trendy Sir Roy, with his long hair and affected political positions, forces himself to go through with a potentially career-ending rock concert performance of his latest composition, “Elevations 9,” featuring violin, bongos, sitar and a punk band called Pigs Out. It is through the character of Sir Roy that Girl, 20 becomes not only a satire of the ‘60s but also a cautionary tale of irresponsibility and pretension. Sir Roy is the epitome of the middle-aged man who envies the younger generation and enthusiastically adopts even their most inane ideals. In his foolish desire to be fashionable and appealing to the young, Sir Roy disrupts his own family by going around with the unpleasant, unattractive Sylvia not because he likes her but because she makes him feel youthful.

Given that Girl, 20 was originally written in 1971, it’s not surprising that some of its satire has lost a bit of its edge, though stereotypes of the ‘60s flower power movement and social permissiveness aren’t lost on people today. Overall, the novel still manages to draw laughs. This reissue, with an introduction by Howard Jacobson, will hopefully present Girl, 20 to new readers and draw attention to Amis’s later works. Far less known than Lucky Jim, Girl, 20 begins as a light comedic satire but is actually a surprisingly insightful novel with a reach that extends well beyond the ‘60s.