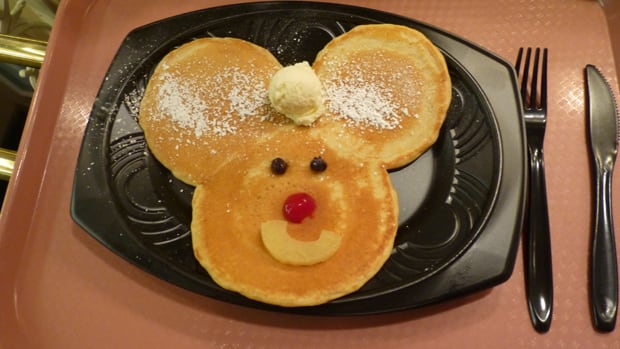 Three weeks ago, my husband Matt and I boarded a plane for the first time as a couple. We were heading for my self-chosen, planned and declared birthday present: a trip to Disneyland. The 58-year-old theme park is one of my favorite patches of earth, a place that we went two out of every three or four years as a family while I was growing up. Each entrance, ride queue area and façade detail holds a story of my parents, my sister, a way younger version of myself.

Eight years ago, a few weeks after we’d first met, I called Matt from the shadow of Sleeping Beauty’s castle. I was on our last trip as a family, the summer after my sophomore year of college. I did the obnoxious “Wish you were here” lamentations and then told him that we would have to come here.

“I’ve never been that interested in going,” he admitted. His family wasn’t the vacationing kind, and he had yet to step foot anywhere near Anaheim.

“We’ll go someday,” I promised him.

After moving to Arizona this year, cutting the distance between my house and the Mouse in half, he begrudgingly agreed to book the vacation. He’d love it, I promised. Rides, costumes and the world’s best theme park eats—how could it get better than this?

To be honest, the first night at Disneyland was a disaster. We arrived on a Saturday during Halloween season, an increasing crowd-draw on a night already packed with people. Locals use their season passes, and travelers like us pour in to start our vacations. Every single restaurant in the park was packed, and even the sandwich shop at Downtown Disney (a street of eateries and shops between Disneyland and the newer Disney California Adventure park) told me it would be a 45-minute wait for a turkey and avocado club. While wandering back through the park in a state of delirium and frustration, I noticed that the line outside New Orleans Square’s French Market was hardly cracking outside the door. I demanded that Matt, who was eyeing his iPhone’s Kayak app for the quickest flight back to Tucson, stalk down a table while I foraged dinner out of the cafeteria-style restaurant.

New Orleans Square demanded a Cajun theme to the menu, which included jambalaya and red beans and rice as options. Fearful of the Disney machine messing up my favorites, I opted for corn chowder in bread bowls, garnished with black eyed peas. While I waited 15 minutes for the cashier, I chatted up one of the servers about the Disney Food Blog, and he ducked into the kitchen to bring out the very last Jack Skellington Coffin Mousse Cake of the night. I’d been admiring the Pinterest pictures for weeks, and the dessert splurge was by far the highlight of the meal. Dense, dark chocolate mousse, crumbly crust, a whimsical white chocolate skeleton head. The bloody raspberry sauce was a perfect touch to this rich treat. The chowder was decent, if not particularly memorable. The beans added a welcome texture. The bread was particularly disappointing and of that way-too-sour sourdough that makes your tongue pucker and your jaw tired from chewing. As we sat after dinner, waiting to catch a glimpse of the fireworks, a helpful employee came by to take our trays.

Five minutes later, I realized they had been holding my Invisalign braces next to the empty plates. The trip was definitely off to a great start.

A Mickey Mouse pancake from The River Belle Terrace was on my must list. “It’s tradition,” I said. After binging on the almost-empty Sunday morning ride accessibility, walking right onto Space Mountain, Finding Nemo’s Submarine Voyage, The Matterhorn and Indiana Jones and the Temple of Doom, I steered into the Southern-style mansion between Pirates of the Caribbean and The Swiss Family Robinson (ugh, I mean Tarzan’s) treehouse. Like French Market, it was a cafeteria-style setup, and it took half an hour to get to the food station. Oh, but it was totally going to be worth it! I ordered my Mickey Mouse pancake with the needless addition of “It’s my birthday” to the attendant. Maybe this obnoxious overshare displeased the pancake-maker, for my Mickey carb dose was a total letdown. I almost sawed through the cheap plastic plate trying to cut tough, overcooked slivers from his ear. Matt’s Mark Twain breakfast of scrambled eggs, potatoes and bacon looked like something processed and dumped out of a Jimmy Dean breakfast bowl.

The upside? The adorable terrace view of the Rivers of America, watching the Sailing Ship Columbia and canoes drift by and the crowd slowly grow. Recharged by a zombie-like sleep and a string of good ride luck, we were—at last—on vacation. If you need a spot to unwind and just enjoy being in Disneyland, this is it. Just don’t bother ordering much more than a soda.

Dole Whips have reached cult status among Disney devotees. A simple concept: pineapple frozen yogurt. Maybe it’s the animatronic birds, maybe it’s the crack. It’s one of the park’s most popular foods. Copycat recipes are whorishly passed through Pinterest, and tweets document the level and intensity of the permanent line. Despite their following, I had yet to try one. Growing up, Dole Whips were off the table. They’re the most expensive menu item at the snack shack, located in the waiting area for The Enchanted Tiki Room show. As kids, we were allowed to choose between a pineapple spear and a glass of pineapple juice. But now I’m a grown-ass woman, damn it. And I will have my damn Dole Whip.

The line moves at a curious speed, for there are only four menu options (spear, juice, Dole Whip or Dole Whip float adding juice and a cute little umbrella to the party), but each transaction seems to take a year, and the average wait is between 20 and 30 minutes. While waiting for my inauguration, I noticed a new addition to the Tiki Room waiting area: a Dole promotional video, telling a whitewashed story of the company’s plantation history. I don’t know how they were able to get such a lobotomized woman to read that much narration.

Finally able to exchange $6.00 for a tall glass of happiness, I walked my first Dole Whip to a bench in front of the castle. Effervescent, tangy, refreshing, and, as a float, as drinkable as it was spoonable. It was definitely more authentically pineapple-tasting than any frozen yogurt shop’s version that I’ve ever tried. And to be clear, I’ve had tons of that crap. The Dole Whip was everything someone could want after spending hours waiting in line and crossing through acres of crowds. I savored the moment of my own treat, my own way, on a trip I paid and planned all by myself. Sometimes being a grown-up rocks.

Like the River Belle, Blue Bayou was a tradition I insisted we uphold. I made a reservation 60 days in advance for my birthday dinner, and for good reason. On a weekend during a popular season, you stand no chance of walking into Disneyland’s most elegant restaurant. Unless you’re a member of the $10,000-membership, 10-year waiting list Club 33 (spoiler alert: I’m not!), it’s the only sophisticated dining spot in the Disneyland park limits. For comparable class, you’ll have to head over to California Adventure. The restaurant is built along the banks of Pirates of the Caribbean, overlooking a nighttime southern bayou. Faux fireflies flicker from velvet-blue sky, and paper Chinese lanterns hang as leftovers from a debutante’s last dance. I requested a waterside table, because it’s no fun to shill out the time and money to eat here if you can’t wave at the boats embarking to meet Jack Sparrow and company.

Our waiter was friendly, if stretched a bit thin by the packed house. He kept our glasses of Louisiana Lemonade (lemonade, Sprite, mango and raspberry flavoring, and an LED Glow Cube that was way more fun than it should have been) full, and told us a tale of watching one of the ride’s boats sink in the bayou earlier this year.

I was skeptical about the pre-entrée gumbo, as the stuff I make is a matter of ginormous pride. Surprisingly, the seasoning piqued my taste buds’ interest, and the chicken and sausage was of a caliber that tasted real and slow-simmered versus premade and scraped from the bottom of a can. Matt’s filet mignon was cooked to an ethereal level of buttery, and my lamb and cassoulet rivaled similar dishes I’ve eaten in Seattle and Portland. A delicate sprinkling of feta effortlessly salted the rosemary-seasoned lamb. Every bite tasted as though it was crafted for our own table alone, not the tens of thousands churning through the gates each day.

Spotting my not-so-subtle “It’s My Birthday!” button, the waiter brought a Mickey Mouse-shaped chocolate mousse (which was just as good as the Jack Skellington coffin kind), complete with candle for wishing. In that moment though, I honestly had nothing else to ask for.

So, what the fuck. World peace.