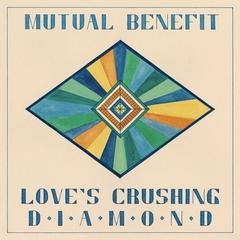 [xrr rating=3.75/5]Mutual Benefit’s Love’s Crushing Diamond is folk music that doesn’t sound folky, spacey and yet tethered to the tangible. It’s wounded without being defeated, songwriter Jordan Lee communicating a level of vulnerability that is tempered with a steadfast, almost begrudging, level of optimism that increasingly emerges in a sort of concept album about learning acceptance and striving on. There is a sprawling openness that belies the rather sparse instrumentation, a sensation of drifting on a secluded lake as the sun sets on summer’s end, or floating down a gently flowing river.

In regards to the water analogies, Lee bookends the seven-track record with such imagery. “I clear my mind of joy and sorrow/ River doesn’t know tomorrow,” he sings in opener “Strong River,” the first lyrics introducing a theme of taking solace in that which is at once constant and ever-changing. Lee presents this fluidity of water as an ideal to strive for, with album closer “Strong Swimmer” ending on the equally unfettered line of “The river only knows to carry on.” That this line also closes out “Strong River” gives the record a feeling of coming full circle, of starting with the hope of attaining the river’s innate ability to press forward without delusions of resistance and of attaining this goal by its conclusion. Each song is thus a chapter in this story of internal progression.

Musically, Lee marries the scratchy with the shimmering. Emerging first on “Strong River” are wind chimes’ metallic echo and a violin that screeches like a train moving down rusty tracks. A clatter of drums, shuffling as if out of disuse, soon join. Then, bit by bit, the formlessness morphs into a cohesive shape as the disparate sounds coalesce into a song, lulling the listener into a sedate world. When Lee’s voice comes in, it’s disarming in its precocious quality, varying between Grandaddy’s Jason Lytle and Sparklehorse’s Mark Linkous with the high nasal pitch of Neil Young.

Come track two, “Golden Wake” — there’s that water theme again — Lee contrasts the synthetic, tin beats of a drum machine with more traditional piano and violin work. The fragility of layered vocals that don’t quite harmonize gives extra weight to the lyrics of disillusionment, establishing the darkness that gives way to light down the line. Up next is “Advanced Falconry”, with its sweeping violin and plucked banjo giving it the weightless quality of a bird of prey gliding on the air currents overheard, such a sensation symptomatic of the narrator’s growing degree of acceptance. “The Light That’s Blinding” then sees matters at their worst, the tone funereal due to Lee and Cory Siegler’s childlike harmonized vocals and the light piano plinking. Despite its title, it’s a tune that only sounds right played at night.

The optimism begins to rear its head with fifth track “’Let’s Play’/Statue of a Man,” Lee proclaiming “And there’s always love/ Whether tattered, strained or torn.” The music itself has an awakening vibe to it, of brushing sleep from your eyes and beginning to face up to reality. “C.L. Rosarian” continues from there with a slight backslide to the morose as the narrator reminisces of a lost love, but has the ability to let her go. It’s a big step in one’s emotional development, and Lee conveys it masterfully. When closer “Strong Swimmer” kicks in, echoing so much of the music and lyrics of “Strong River,” it’s the testament of a man who has found his true essence. He is richer for what he’s gone through and recognizes that the dour experience from which he learned is in the past and no longer a dominating influence. As the tune winds down, Lee reiterates “The river only knows to carry on” in a far different context than when he first expressed, his narrator now accepting that he can’t help but press forward, so why resist the current? It’s a statement of arrival, of self-realization, and the most appropriate way to end an album about seeking discovery of oneself.