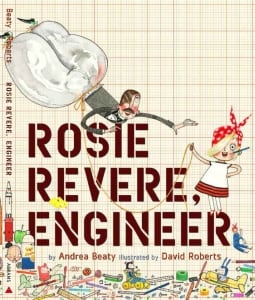 [xrr rating=4.0/5]We’ll never know if the cheese hat would’ve kept the snakes off of Zookeeper Fred’s head. According to second grader Rosie Revere’s schematics, the contraption composed of fan parts and cheddar cheese spray should have done the trick. But Fred, seemingly quite comfortable with a python coiled around his bald pate, laughs and laughs when presented with the hat, and in a blaze of embarrassment, Rosie chucks her invention back onto the shelf and stuffs her engineering dreams alongside it. Readers know that the chuckles were out of tickled endearment—“I love it,” Fred hooted. “Oh, truly I do.”— but even kindhearted misunderstandings can snuff out a beginner’s enthusiasm.

This discouraging vignette is the conflict point in Andrea Beaty’s effervescent picture book Rosie Revere, Engineer. As if a compacted Künstlerroman in miniature, the story follows Rosie as she struggles to cope with every artist’s most familiar enemy: failure. Her dreams only go dark until her great-great-aunt Rose comes for a visit. Aunt Rose confides to Rosie that after all of the work she had done on airplanes years ago, she’s never actually flown. It was the last goal left on her long list! Rosie casts aside her resultant fears from the cheese hat debacle and sets to work on a heli-o-cheese-copter (first spray cheese is weaponized, now it’s an aeronautical propellant—a subtextual commentary on the most artificial of artificial foods?). No happy ending here—on its test run, this copter built with hula hoops, tennis balls, spray cheese and an office chair lifts off, sputters and then crashes. Aunt Rose is heard (dun dun DUNNNNN) laughing.

But! Aunt Rose takes care to talk Rosie through it, by flipping this disappointment on its head: “Before it crashed, Rosie… before that… it flew!” Concluding not in triumph, but instead in collaboration and modification, Rosie learns that much of the inventing process is identifying progress by making a series of better failures. A somewhat abrupt and tacked-on epilogue shows all of Rosie’s classmates with their whimsical whatchamacallits, expressing achievement and glee. This sweet inclusivity actually dilutes the message, compensating for the open-ended fate of Rosie’s cheese copter.

An homage to WWII feminist hero Rosie the Riveter, Beaty and illustrator David Roberts work in her iconic visual cues by degrees. A tiny Rosie the Riveter figurine, bicep curled, is found among the random objects in Rosie’s stash of readymade materials. That image of Rosie’s junk pile is like an “I Spy” spread, a glut of hundreds of bits and bobs (a broken tennis racquet, cardboard tubes, a Rubik’s cube, balls of yarn, cans of spray cheese, of course), speaking not only to the quirky eye of ingenuity, but also to the contemporary trend towards repurposing and reclamation. Until we meet the actual Rosie the Riveter in the person of great-great-aunt Rose, the theme is carried throughout by way of her trademark polka-dotted red scarf, worn as a bow in Rosie’s hair, trailing out from under her bed, or as a functioning piece in any of her varied inventions. “We Can Do It!”—both battle cry and reminder—is painted on the side of the in-process cheese copter II modification.

Roberts’s illustrations nod to the kind of drawings Quentin Blake provided for Roald Dahl chapter books. The adults in particular are drawn as friendly monstrosities, their bodies represented by exaggerated shapes. One of Rosie’s other aunts is essentially a tall isosceles triangle with a head, another has a bouffant roughly the same size and shape as her bulbous bottom. Aunt Rose herself is drawn with an oversized, matronly bosom, not so much an indicator of advanced age as it is a subliminal suggestion of Rosie the Riveter’s motherhood to a generation of self-sufficient feminists (at least I’d like to think that was the intent). I only wonder why there is some sort of whiskering on her face; if they are meant to be expression lines, they only look like stray pen strokes.

Written in an AABB rhyme scheme with a Seuss-like meter, Rosie Revere, Engineer can engage the younger readers while giving the advanced readers more to chew on. In a two-page spread, there’s a historical timeline about women in aviation accompanied by rough pencil drawings. The message of finding opportunity in failure, though, is appropriate for any grade level, adulthood included. An antidote to the pervasive Disney princess craze, Rosie Revere reminds girls that spray cheese is a viable alternative to plastic tiaras.