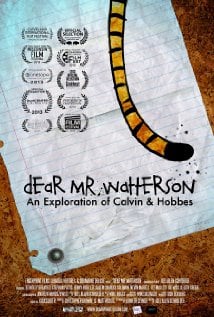 [xrr rating=2.5/5]This modest documentary about a comic strip takes at least one major cue from blockbuster adaptations of comic books: it includes a post-credits scene. After pages and pages of names scroll by, including the names of many of those who supported this project on Kickstarter, director Joel Allen Schroeder gives us a shot of himself walking away from the camera down a small-town Ohio Street on a crisp autumn day. Schroeder is walking and talking with Nevin Martell, author of Looking for Calvin and Hobbes: The Unconventional Story of Bill Watterson and His Revolutionary Comic Strip.

Martell is one of the recurring talking heads in Schroeder’s documentary. He has the last words in the movie, and gives the documentary its title. You see, the book’s author visited the small Ohio town where Watterson lives, but out of respect for the reclusive cartoonist’s privacy, stopped short of contacting the man, never getting past the introduction to a letter that was never finished and therefore never sent.

If you think a review about a movie about a much loved comic strip should spend more time discussing the comic strip and its creator, rather than the director and his talking heads, well, that’s the problem with Dear Mr. Watterson. Not unlike the embarrassing documentary-book combo Salinger, Dear Mr. Watterson is a movie made by fans and about fans, and if it doesn’t reach the tacky lows of Salinger’s cringeworthy reenactments, it still suffers from a doe-eyed bias.

Schroeder inserts himself into the film from the very beginning, setting up the kind of documentary-as-quest that can be so detrimental to the form. He sets up talking head after talking head with comic strip artists and others inspired by Calvin and Hobbes, and only occasionally addresses people who knew and worked with Watterson, primarily the president of publishing house Universal Uclick, Lee Salem.

The director’s personal quest eventually gets to more interesting destinations than the childhood bedroom that he once plastered with Sunday comic strips. Library types will be intrigued by a visit to the Billy Ireland Cartoon Library and Museum at Ohio State University, and attentive fans of the strip may find resonance in scenes of Chagrin Falls, Ohio, the bucolic small town where Watterson grew up.

More interesting are sidebars into the history of comic strips, with special attention given to George Herriman’s great Krazy Kat. Dear Mr. Watterson argues that shrinking size of the modern Sunday funnies sections compromised artists’ ability to convey more sophisticated designs into smaller spaces. This assumes that sophisticated is better, which isn’t necessarily the case. The argument — and the film — fails to take into account iconic strips like Ernie Bushmiller’s Nancy, which packed a deceptively simple brilliance in a way that would read just fine in smaller spaces.

Calvin and Hobbes was a classic, inventive strip that has inspired a fairly ordinary documentary that’s more about the fans than about the artist. Fans will eat it up, but there is little revelation here. It’s to the director’s credit that he doesn’t intrude on the life of an artist who values his privacy. But discretion doesn’t make an interesting movie.