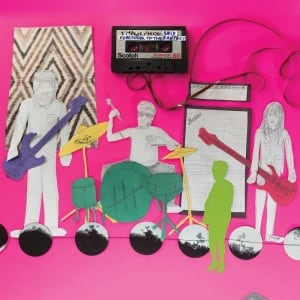 [xrr rating=3.5/5]How much weight of anticipation can be put on a single album? From the time Connecticut noise rock maestros Magik Markers opened for Sonic Youth on tour, in 2004, the band spent several years as the most wildly prolific creators on the scene, releasing a minimum of four new things per year, sometimes threatening a double digit tally. They were all over the place—full-length albums, singles and a lot of CD-Rs—like a hyperactive vaudevillian tapping furiously in advance of the inevitable hook coming to yank him off the stage. Then they went dark, creating absolutely no product for almost four years. The various reasons offered by the band members all amount to variations on “life got in the way.” With the release of Surrender to the Fantasy, the whole process of assessing what they’ve done feels topsy-turvy. It’s not just another album. Instead, it stands in for everything that may have come out in the interim, as if restoring equilibrium to the Magik Markers’ gloomy, buzzy, coolly seductive universe.

Surrender to the Fantasy couldn’t possibly stand in for all the phantom creativity of the past few years, but it does offer a solid enough reintroduction. And with Sonic Youth likely gone for good, Magik Markers effectively steps up to be a suitable replacement for those (like me) who aren’t necessarily finding abrasive pleasure all the various spinoffs and solo projects from the New York institution’s former members. It helps that Elisa Ambrogio’s vocals often recall those of Kim Gordon, paradoxically detached and confrontational at the same time. When Ambrogio’s distorted voice is bending its way through the crumbling album closer “WT,” it could almost be passed off as a track from Goo that’s somehow been overlooked for 20 years. The comparison is necessary but imperfect, since Magik Markers is driftier, lacking Sonic Youth’s inclination to push for the messily majestic. This is a slow, withdrawn, angry jam meant for a basement of bare gray walls.

The facts of the record have less to do with basements, though, and more with attics, with some tracks recorded in the upper-level studio of J Mascis. Perhaps inspired by their benefactor, Magik Markers also shows they can craft a volcanic guitar assault that sounds like a psychedelic freak out delivered through a burned out amp (“American Sphinx Face,” which has improvised music to go with its punchy, Patti Smith poetry). Then they can turn around and serve up the delicate “Young,” (“The worst part about being young/ Is thinking nothing/ Is thinking nothing ever comes”) which brings together simple acoustic strumming with occasion forays into Beach House lushness. Befitting a band that once released enough material that it seemed like absolutely everything they came up with got a spin in the light, Surrender to the Fantasy is nicely unpredictable. Not everything works, to be sure (I could do without the shouty, sub-Beefheart repetitiveness of “Bonfire,” for example), but there’s a strong sense that Magik Markers are finding their footing after the layoff just fine. Whether their release schedule is back to the constancy of the past or a more humane level of productivity, it’s worth getting excited about what they’ll deliver next.