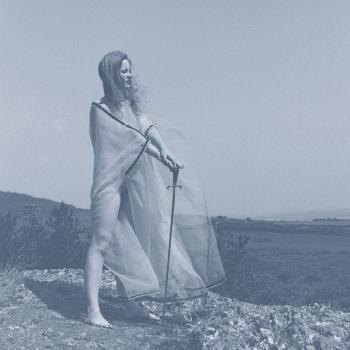 [xrr rating=3.0/5]The acoustic Blue Record EP gathers together airy versions of three tracks from Unknown Mortal Orchestra’s 2013 LP, II, along with two covers. Frontman Ruban Nielson recorded the whole thing in his basement after playing around with acoustic versions of his songs, and Blue Record adopts the intimate feel of an artist trying something new. The results aren’t particularly dramatic, or even a necessary supplement to Unknown Mortal Orchestra’s two albums, but it is worthwhile to hear Nielson’s songs in this unadorned form.

Unknown Mortal Orchestra’s studio records both rely heavily on the fuzz, clatter and drama of muted funk meeting sunny psychedelia, so it’s a little bit startling to hear Nielson’s grainy pop songs absent of all the future-gazing production that made Unknown Mortal Orchestra and II unique amalgamations of styles and sounds. Instead, there are just two voices and a picked guitar, often barely filling one side of the stereo track with only a bit of ghostly echo in the other. The album’s song selection is impeccable, including “Swim and Sleep (Like a Shark),” “So Good at Being in Trouble” and “Faded in the Morning,” along with Beck’s Stereopathetic Soulmanure strummer “Puttin’ It Down” and the Dirty Projectors’ title track “Swing Lo Magellan.” They play that last one as close to the original as possible, but “Puttin’ It Down” is stretched, barely pieced together and oozes into a wrenching shift as the tape reel slows down about halfway through the song. It’s Nielson’s oddball stamp on the song that comes off as the most intentional and notable moment of the EP.

“Swim and Sleep (Like a Shark)” and “So Good at Being in Trouble” both achieve a notably different affect reduced to their most stark, folk-rendered forms, which ends up being a strong justification for this acoustic document. II played up the dark psychological fragility of Nielson’s songwriting, a tone that translates even more directly without generous arrangements to distract from the songwriter’s ragged perspective. “Swim and Sleep (Like a Shark)” lulls beautifully, the vocal harmonies sweetly fluttering as Nielson’s guitar squeaks along, a pastoral alternative to the spiky studio cut. “So Good at Being in Trouble” takes the thumping groove of the original version and delivers the song as a spectral folk crooner. The acoustic version plays up the occasionally piercing edges of the song’s refrain, Nielson’s delivery emotional and haggard. The original may be superior, but the quality of Nielson’s songs is perhaps more obvious here than in their more complete forms. Demonstrating how good Unknown Mortal Orchestra’s songs can be at their simplest only enhances the experience of listening to the band’s more robust recordings.