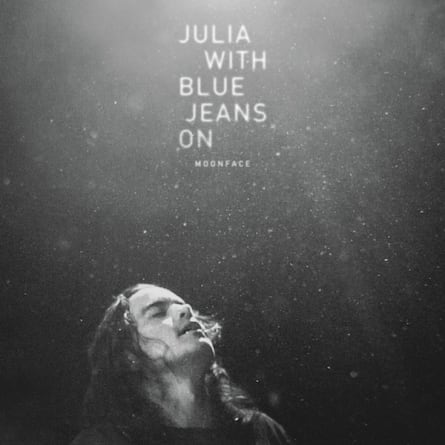 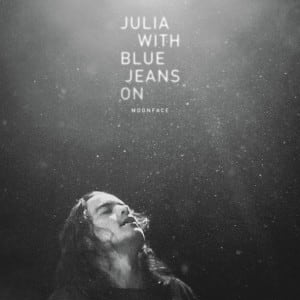 Now that Wolf Parade has run its course and Sunset Rubdown has achieved its happy ending, Spencer Krug has been burning the midnight oil with Moonface. Julia with Blue Jeans On arrives as Krug’s third LP under the Moonface moniker in as many years. The prolific Canadian musician has continually demonstrated a penchant for trying new things and exploring new sounds. He comes at his emotion-packed songwriting from different angles each time, it seems, and anyone expecting another collaboration like 2012’s Heartbreaking Bravery, which he recorded with Helsinki-based band Siinai, couldn’t be further from the mark. Throughout Julia with Blue Jeans On, Krug is instead stripped down to nothing but his piano and his famously tremulous voice. He clearly aims to bear his soul through emotional nakedness here, but instead—like actual nudity—the singer’s previously concealed flaws are brought to light.

Even though the glistening piano and Krug’s throaty yet fragile voice succeed in stirring up some semblance of feeling on the surface, the record fails to capture the kind of profundity that Krug clearly desires. On an album offering no other instrumentation but piano, it’s no surprise that each song bears a similarity to the last, placing the onus on Krug’s songwriting to make a given track stand out. Unfortunately, songs like “Everyone is Noah, Everyone is the Ark” instead show that Krug almost uniformly relies on grandiose or mythic imagery. For as much as Julia has been touted as Krug unmasked, tracks like this see him hiding behind metaphor. The lines “Everyone ends up talking to the sky/ Or looking the elephant in the eye” shoot for epically profound but actually obfuscate the fact that the album rarely offers a peek into the musician’s soul and too often delivers lyrical platitudes with only a slight twist.

On “November 2011,” Krug sings, “Let me take you up these stairs, let me take you to my life/ Let me take you like a lamb leading the slaughterer to the knife.” While at first blush that may sound hella cool, it’s so steeped in exaggeration and sentimentality that it’s tough to choke down, especially given that the song also finds Krug singing about selling his soul, pacing like a tiger in a cage, setting fire to his music, setting fire to his computers, slaying ghosts and calling both himself and his lover crazy. The title track, meanwhile, throws around psychological and religious references as well, referring to a “madman’s game” and rhetorically asking, “Is there anything more famous/ Anything more grand/ Anything more noble than a folded hand?” And in the plodding “Your Chariot Awaits,” the object of Krug’s affection is referred to as a crashing satellite, falling rain and a hurricane. Subtle this album is not.

But Krug certainly knows how to tickle the ivories. If the eight-plus minute “Dreamy Summer” had simply been an instrumental track with Krug at the piano bench, it would have been a thing of beauty (as it is during the track’s wordless second half). Instead, he can’t help but get all Jesus-y again with a water into wine reference (when he’s not singing about “turning everything into gold”) amongst other hollow and listless lyrics that would’ve been better off shelved entirely. Only album opener “Barbarian” manages to strike the proper balance between pensive piano and the kind of genuine emoting that’s not dressed up in all manner of epic allusion (he manages some actual vivid images and direct address before inevitably delving into the abstractions of lambs on altars).

For diehard Krug fans, there’s enough trembling vocals and sometimes gorgeous piano to warrant a few listens, especially if you prefer myth and metaphor over true poetry and emotional earnestness. But if you want to listen to a heart stripped bare behind a piano, queue up Perfume Genius instead. As far as this album is concerned, you’re better off letting the sun set on Moonface.