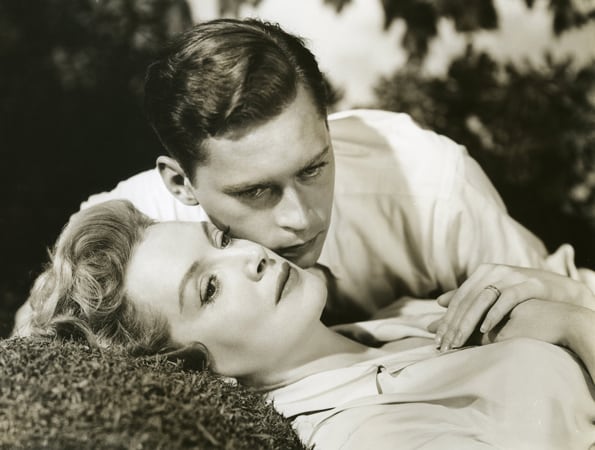 It is indicative of its time that a groundbreaking film about sexuality and gender stereotyping was forced to tip-toe so carefully around its subject matter. Adapted for the screen by the original playwright, Robert Anderson, Tea & Sympathy was virtually impossible to make to the standards of the Production Code’s conservative rules. Compared to today’s films on the topic, the film is a shy attempt to address the harsh reality of homophobia, but as a film exploring the aggressive gender norms of the 1950s made in that decade, the film is an invaluable insight into an era. Although Tea & Sympathy is ostensibly a minor Minnelli work, it is in fact an important early piece in queer cinema.

Although it’s a Minnelli film, Tea & Sympathy shows only subtle hints of his signature aesthetic. Minnelli committed the original stage play (including the original cast) to film, even admitting that thanks to Elia Kazan’s exhaustive direction on the stage and the experience of the play’s long run, he had to do very little to direct their acting. Minnelli’s main contribution to the film is his aestheticizing of the screen, packing so much of the unspoken homosexual subtext into his use of color and framing. The one obvious Minnelli touch is the film’s climactic scene – moved from the play’s setting of a dorm room to a wooded set. This dreamy glade shrouded in a haze of blue-green fog provides an enchanted setting for the film’s major offense to the censors. The pastel colors and seamless cinematography by John Alton highly romanticizes the encounter between Tom and Laura.

The controversial film revolves around Tom Lee (John Kerr), a sensitive young student at Chilton, an all-boy’s school, who faces endless teasing and mocking from his fellow students because of his “unmanly” interests in folk music, tennis and poetry. Compared to his unruly classmates, Tom is decidedly “off-horse” and hopelessly far from being one of the “regular guys.” Although the word is never spoken aloud, Tom’s classmates accuse him of being a homosexual and call him “Sister Boy.” This bullying is unknown to Tom’s father, Herb, who is an old buddy of Chilton’s headmaster Bill Reynolds (Leif Erickson), but even he senses that Tom isn’t what he expects in a son. His hair is too long, and his supporters at tennis matches are “fairies.” During a parent weekend, Herb attempts to set all of his son’s faults straight. Tom will get a crew cut and start spending more time with the boys instead of in the company of the faculty wives where he is most comfortable. But Tom avoids all of his father’s ultimatums. His roommate, Al, is the only one who doesn’t shun him for being an oddball, yet even he eventually decides to switch roommates for the coming term. 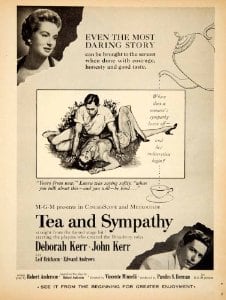 Standing on the sidelines while all of this occurs is Laura Reynolds (Deborah Kerr). At first she is drawn to the quiet, introspective Tom because he stands out so from his classmates. His sensitivity reminds her of her first husband, who was killed in World War I. When his differences begin to encourage bullying from the other boys, Laura becomes Tom’s one sympathetic ear. She frequently has him come sit with her, drink tea and discuss his time at school. Minnelli illustrates in one expressive shot Laura’s position, stuck between her husband and Tom’s troubles: Herb and Bill discuss Tom while Laura listens through the window, her yellow dress mingling with the yellow curtains (a color associated with optimism and hope). When all this pressure gets to be too much and Tom tries to prove his masculinity with a local prostitute, he can’t bring himself to do it and attempts suicide, it is Laura who tracks him down in the woods near the golf course and comforts him.

The impact of this story is somewhat lost in the frame devised by Robert Anderson to appease the censors. The majority of Tea & Sympathy is told in flashback, as Tom arrives at a Chilton class reunion. Two men crassly brag about the alumni’s wives, “Our class married darn well – a bunch a real pretty women.” We discover that Tom is now married with a family of his own, but nevertheless he is shown completely alone throughout the entire sequence. This is an ingenious way for Minnelli to abide by the censors while still hinting that Tom is gay. But the film ends with a victory for the censors, as Tom reads a letter from Laura who explains how her one act of adultery led to the end of her marriage and an unhappy life. Since the climactic scene in the glade couldn’t be removed, it at least had to be followed by guilt and punishment for the adulteress.

While the demands of censors may have downplayed some of the play’s original subtexts, the film remains an invaluable look at an era of repression. The sheer creativity required from both Anderson and Minnelli to make such a controversial film work despite the censors is staggering, not to mention the courage it took to address this topic in the 1950s. Minnelli could have easily settled for making the best out of a bad situation and filmed a halfhearted adaptation of Anderson’s play, but instead he made an effort to subvert the censors where possible. The gravity of what occurs – a teenager discovering his own sexuality and a woman committing adultery – is denied much of the weight it deserves. But what did make it on screen was groundbreaking.