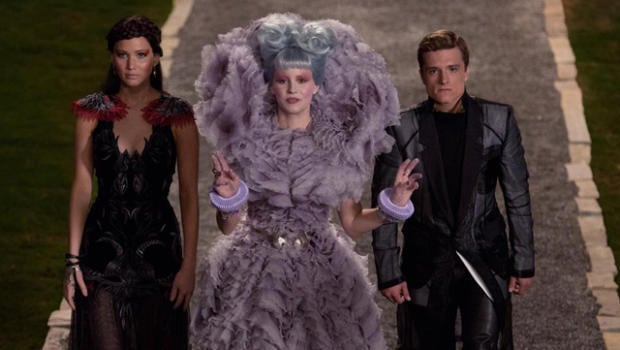 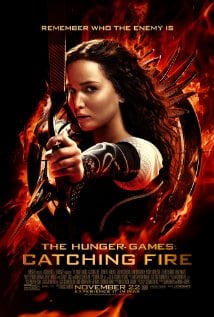 The Hunger Games juggernaut returns to the multiplexes this weekend, guaranteed to scare up more money in its opening hours alone than any of us will ever see in our lifetimes. Like the Harry Potter franchise, the Hunger Games above reproach, the name Katniss Everdeen enough to rope them in and fill out the auditorium.

When we check back in with Katniss (Jennifer Lawrence) her victory in the series’ first installment has left her with nothing but a bad case of PTSD. Her district is still under heavy repression and life has not improved for anyone she cares about. She is also struggling to maintain a relationship with boyfriend Gale (Liam Hemsworth) who is none too pleased about Katniss’ romance with fellow Hunger Games victor Peeta (Josh Hutcherson), one she swears was fabricated to save them both. But now, Katniss is about to embark on a victory tour with Peeta and President Snow (Donald Sutherland) wants her to convince the populace that romance has continued to distract the populace from its growing dissatisfaction with his regime’s repressive measures.

Catching Fire’s first section concerns the power of the media, a staunch criticism that folks like the empty-headed socialites can lose themselves in highly public, whirlwind romances much like the furor over the nuptials of Prince William and Kate Middleton. The Games themselves, in all their cruelty, are just a more brutal version than some of the horrors people suffer on our own reality television shows. People get off on the suffering and the drama, making Suzanne Collins’ engaging novels a sharply observed criticism on entertainment, even in our “civilized age.” If the Hunger Games did exist for real, I’m sure there would be an audience and a Tumblr devoted to how much someone hates their bitchiest contestant.

Meanwhile, the crushed folks in the poorer districts aren’t buying it and see Katniss as the symbol for change. But this elevation comes with a price as Katniss and everyone she loves is under constant threat and our heroine finds herself caught between playing a part to save her family or revealing her true feelings and supporting a revolution. Needless to say, both of these decisions come with dire consequences.

Following in a format that mimics its predecessor, Catching Fire lacks some of the freshness and ferocity of the first installment. Lawrence once again imbues Katniss with blistering passion, but the film feels almost like a retread, especially when our heroes are thrust once again into a Hunger Games scenario. The stakes may be higher this time, especially with the survival of the revolution hinging on the survival of its symbol, but the film’s position as the middle child in a trilogy (despite the final book being stretched into two films) makes Catching Fire feel more like the filler between beginning and finale than its own entity.

Like the first film, Catching Fire boasts a high production value and director Francis Lawrence (replacing Gary Ross), uses the most of the breathtaking cityscapes of the Capitol and the lush terror of the newest arena for this iteration of the Hunger Games. All of the major actors from the first film return, including Woody Harrelson, Lenny Kravitz and Elizabeth Banks. Joining the fold this time is Philip Seymour Hoffman as Plutarch Heavensbee, the new Games Master whose guile may prove too much for Katniss and Peeta.

The time and effort gone into Catching Fire does not go without notice, although the film does stumble in the same places as the first part with glossed-over contestants and some softening of its content to achieve a teen-friendly PG-13 rating. The film ends with a cliffhanger, setting us up for the interminable 12 month wait for the third installment. Despite my misgivings, I’m eager to see what happens next to Katniss.