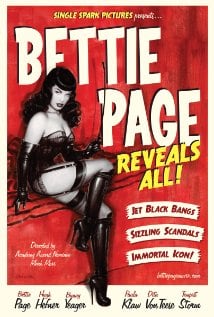 [xrr rating=2.75/5]There’s a clear double meaning to the title of the new documentary Bettie Page Reveals All. The most obvious interpretation relates to the activity that made Bettie Page famous in the first place: posing for photographs as a pin up model during the 1950s, including a multitude of shots in which she progresses past peek-a-boo to stand proudly without a stitch of clothing. The far more interesting act of revelation found in the new film is the entirely open reminiscing of Page in her old age, reflecting on the unlikely journey that took her from provocative model at a time when such images often had to be secured through fairly illicit means to one of the most iconic figures of her era. Besides the enduring popularity of the actual photographs, Page’s look—defined by her distinctive dark bangs—is still adopted by a small legion of women who prefer the style of 50 years ago. It’s hard to even think of an equivalent to Page’s influence. Jennifer Aniston’s Rachel Green shag was the haircut at one point, but there’s not a whole lot of women opting for it these days to declare their kinship with the ‘90s.

The extended interview with Page—presented here as audio only—is notable because the former model has largely been silent in the public sphere in the decades since she took her last professional photograph, opting for privacy in a way that only heightened her mystique. Rumors flew like crazy, and even those that were grounded in some bit of truth took on fanciful dimensions, often in an effort to explain why she stayed withdrawn from the spotlight, a choice seen as lunacy in a media age increasingly defined by a Kardashianesque pursuit of fame at all costs. For instance, the dribs and drabs of information about Page’s post-career embrace of religion led to a lot of speculation that she shamefully disowned her disrobed past. On the evidence of her testimony here, that’s absolutely not the case. Page claims she never saw any problem with nudity whatsoever, and even reacts to her most salacious shots—such as the plentiful bondage pictures, often structured around fan requests—with little more than a raspy old lady chuckle that effectively says, “To each his own.”

Director Mark Mori breaks the film into roughly three pieces: Page’s early life, her sensational modeling career and the extended afterlife of her fame, in which she moved from minor celebrity to cult heroine. The first portion is the most problematic, as Mori presents a hyperactive mish-mash of stock footage and overly fussy music as Page mundanely shares the history of her formative years. Benefiting from the thousands of pertinent photos at his disposal to fill out the visuals, Mori fares better once he gets to Page’s actual modeling, tracking through her playful approach to her work at a time and in a field that was far from glamorous. But the most interesting story by far is the way Page’s star rose much later. An ample amount of credit for the unlikely revival is ascribed to the late comic book creator Dave Stevens, whose borderline infatuation with Page led him to give his soaring hero the Rocketeer a girlfriend named Betty who was the spitting image of his distant dream girl. Happily, Stevens was instrumental in connecting Page with Hugh Hefner (who purchased a now-famous picture of Page in front of a Christmas tree for the January 1955 issue), a man who had the clout and the finances to secure the legal team necessary to make sure she received some due compensation for the growing surplus of items bearing her image. Page may not have craved more time in the spotlight, but it’s gratifying to know that she was sharing in the profits made from her curvy figure and striking smile.

The latter portion of Page’s life is indeed so interesting that Mori can’t quite prevent the film from feeling a little unbalanced, his earlier thoroughness making the consideration of her slowly swelling legacy feel a little rushed, therefore too much on the surface. The same problem is true of the less triumphant aspects of Page’s life, such as the series of ill-considered marriages and some time when she was forcibly institutionalized for mental illness. As if trying to treat Page gently, Mori slips past these incidents with a blithe indifference. Some of that undoubtedly comes from approaching them with the same resigned indifference Page exhibits in the interview, but it still feels like he’s unduly fogging the metaphoric lens. Page died in 2008, at the age of 85, having successfully preserved her enduring image as someone who young, beautiful, vibrant and sexy. In his documentary, Mori does her the favor of admirably continuing that strategy. Still, he could have stood to reveal just a little more.