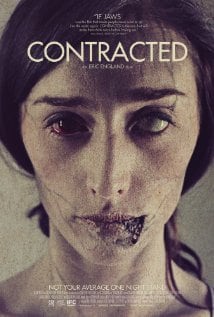 [xrr rating=2.5/5]Without risk of hyperbole, it’s safe to say that everything about the human body is absolutely disgusting. No matter how we want to gussy it up with fashion or exercise or cosmetics, we’re all ambulatory pieces of meat, prone to damage or infection at any time. The subgenre of body horror is dedicated to shoving viewer’s faces in that horrible fact. While it’s produced masterpieces like Videodrome and oddities like The Human Centipede franchise, it’s never been a particularly popular or innovative aspect of horror films. Writer/director Eric England’s new film Contracted puts an interesting spin on the gross-out factor inherent to the medium, but pushes incredulity too far to make it a truly successful movie.

By any reasonable measure, Contracted is a horror movie. But it’s an unusually structured example of its type, less concerned with shocks or scares than examining its protagonist (both emotionally and medically). As it begins, Samantha (Najarra Townsend) is invited to a party by her best friend, Alice (Alice Macdonald). When Samantha arrives, she already appears to be in some distress, unable to get her girlfriend Nikki (Katie Stegeman) on the phone. Samantha gets drunker and drunker (at Alice’s instigation) until she eventually ends up being roofied and raped by an out of focus figure. Almost immediately, the film flashes an intertitle stating “DAY ONE.” It’s an ominous moment, swiftly followed up by Samantha’s grotesque disintegration.

England does an admirable job of slowly adding mounting evidence that Samantha was far from a stable person even before being infected by whatever it is that wreaks havoc on her body. While she initially appears to be a shy, attractive young woman, mostly unstated substance abuse problems, identity issues and (not least) a sour disposition are revealed as her hair and teeth fall out and her face becomes a mass of sores. In that, Contracted is much more of a character piece than an attempt to scare. But the film’s real problem is that it strains a viewer’s suspension of disbelief entirely too far when it comes to Samantha’s actions.

Stupid decisions are a key element of horror films. Most would not exist without a character doing unbelievably idiotic things at just the right moment. Contracted is no different, but the fact that Samantha keeps putting off going to a hospital and claiming that she’s fine while she is literally falling apart is just too much. Even by the lax standards of the genre, people are going to freak out and seek emergency medical attention when their fingernails rot off. Here, Samantha just puts on big sunglasses and goes to her food industry job. While that gives some opportunity for further grossness, it’s also a bit too ridiculous in a movie that otherwise mostly sticks to a realistic view of events. In the last moments of the film, Contracted flips the script and shifts genres abruptly, leaving viewers with a sudden new taste. It’s a dramatic ending that feels as though it should have been expected, yet lands like a surprise. It’s a pity that a movie with as much promise as Contracted should be weighed down by a fundamental part of its story, but it can’t quite ever make it past that hurdle.