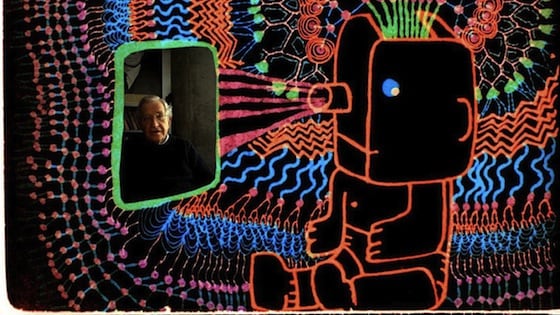 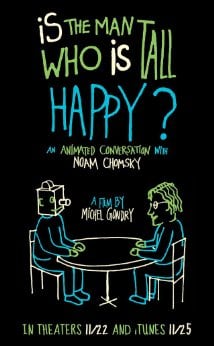 “You call your analyst Donnie? I call mine Dr. Chomsky, you know, or he hits me with a ruler.” Woody Allen is talking about a fictional Chomsky in that quote fromManhattan, but he might as well be talking about the intimidation factor of Noam Chomsky, the subject of the director Michel Gondry’s documentary Is the Man Who is Tall Happy? The noted linguist and philosopher might tower over Gondry even if there were not a language barrier between the French director and a man whose ideas can be daunting even to a native English speaker. But the director’s struggle with language — an apt challenge to have when having a conversation with a man called “the father of modern linguistics” — makes his documentary that much more fascinating. If Gondry’s verbal faculties are not up to the challenge, he does rise to the occasion visually with a vibrantly animated film that can be as beautiful as it is challenging.

Gondry begins with a self-portrait of the filmmaker at work. In a charmingly analogue animation, he shows you his working process: an overhead projector rigged to a 16 mm Bolex propped up on a copy stand as he draws the images you see on film. It’s a perfect cinematic example of one of Chomsky’s major concerns. As the linguist explores the acquisition of language, the filmmaker cleverly demonstrates the acquisition of images.

The director is a native French speaker, and nearly all of his voice-overs — some of it narration, some of it in dialogue with Chomsky –– is accompanied by handwritten subtitles. Gondry’s heavy accent at times makes one more barrier to him and Chomsky to understand each other.

I’m usually put off by documentaries where the directors insert themselves into the narrative, but in this case the director’s struggle with Chomsky becomes the viewer’s. What better way to illustrate principles of linguistics than by illustrating linguistic problems? The film is about Gondry’s ideas as well, and that’s by design. The director argues that with cinema, it’s not always clear to an audience that they’re watching propaganda. That is, when you’re watching real people, it’s not as obvious that you’re watching an author’s version of reality, a version with the bias and intent that comes from personal experiences. Animation, on the other hand, gives you a clearer sense of the author; there’s no question you’re in somebody else’s reality.

It’s not a perfect argument. Gondry’s live-action features, particularly Eternal Sunshine of the Spotless Mind, reveal an unmistakable authorial personality. But the vivid animation of Is the Man Who is Tall Happy? succeeds in revealing Gondry’s thinking process as he tries to work out Chomsky’s ideas. The animation circumvents the French-English language barrier by using a third language, that of cinema.

One example: Gondry creates an animation – man-bees constructing a hive with a wooden structure – around footage of himself interviewing his subject. Windows are placed so that Chomsky is framed by one window and Gondry by the other. The director’s subject may be Chomsky, but his quest is for meaning, and his animation visualizes the mental structures he and Chomsky build, and the separation between them.

Some of the animation is simply illustrative, but Gondry’s style, primitive but inventive, brings ideas to life throughout the film. I didn’t think I’d find a documentary about the father of modern linguistics so entertaining, but Gondry has made a lively and provocative film, with the emphasis on film as opposed to video. The edges of the 16 mm frame are constantly visible throughout the documentary, a reminder to cinephiles of all ages of the pleasures of the analogue frame. As this is an age where commercial movie theater chains have eliminated 35 mm film projection, I don’t know if Gondry was even able to strike any film prints of his new work. But I’m glad somebody is still making movies this way.