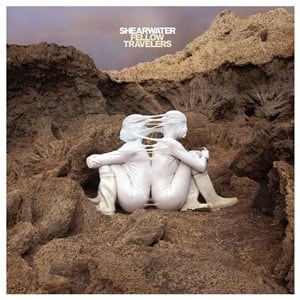 [xrr rating=3.5/5]Cover albums often have the unsavory smack of laziness or at the very least contractual obligation. It is only on the rarest of occasions that such a collection actually reveals something meaningful about the artist responsible, deepening understanding of the works that preceded it (or followed it, for that matter). The newest release from Shearwater—the band’s ninth overall—does just that, maybe because the concept itself is so intriguing. This isn’t simply a case of a group plucking up songs they like or even those that can be termed to be significant influences. Instead, the title of the album, Fellow Travelers, offers the explanation. These are all songs from artists that Shearwater has shared the road with over the years, the bands they’ve opened for or that have been their support act. What’s more, several of the performers in question were recruited to pitch in on the album, but always brought in on songs other than their own, in part to avoid the perception that they were tacitly endorsing the new versions. The result is like an indie rock jamboree: celebratory, scruffy and deeply earnest.

Given the backstory, the album picks up the beaming sheen of tribute. It’s hard to hear Shearwater strive for the abrasive hugeness of Xiu Xiu on their “I Luv the Valley OH!” or the chugging oddity of the Folk Implosion on “Natural One” without considering the level of affection that’s been poured into every bit of the process, from selection to arranging to recording. And yet everything on the album remains true to the Shearwater aesthetic, the airy, yearning music and the concentration on the intricate beauty of songwriting that band mainstay Jonathan Meiburg brought with him from Okkervil River. And in breaking down the components of the different songs to reassemble them into something befitting their own band, Shearwater often seem to be finding their way to a truer version of themselves, whether through the shifty dynamics of St. Vincent’s “Cheerleader” or the aching patience of Wye Oak’s “Mary Is Mary.” When they strip down Coldplay’s “Hurts Like Heaven” to a relaxed stateliness that recalls the National, Shearwater even seems to be pointing to how the original group could find a purer version of themselves, although that implied commentary is surely inadvertent.

Arguably the most telling song on the album is the sole original: “A Wake for the Minotaur,” a duet with Sharon Van Etten. Almost painfully fragile, like a relic of some unknown 1970s folk icon, the song is spare and oblique. Meiburg has said the song represents the spectral feeling that comes from touring, the sense of intangibility in going from place to place, permanently unmoored. Only bandmates provide the level of consistency needed for something to feel real, and it is those others who are part of the journey—those fellow travelers—who are a reminder of existence outside the group, not a part of the main band but moving alongside, neither within nor entirely outside. When Van Etten sings, “Til my memory lies clear/ As a tear in the darkness/ A hole in the light/ And I know where you are,” it carries the weariness of being lost and the hope of being found. That’s an understandable lament for those who have chosen the vagabond life of the working musician, never truly at home while entirely of the world. As with everything else on Fellow Travelers, it conveys exactly why those who share this strange, lonely route become the most treasured.