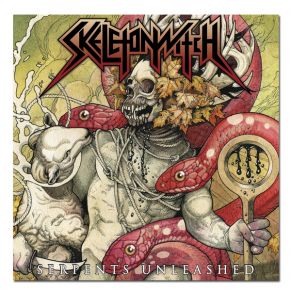 [xrr rating=3.75/5]Perhaps it’s the dedicated touring and passionate live performances, or almost ten years of studio work with a number of metal’s best producers, but Skeletonwitch have come a long way since their 2004 debut, At One with the Shadows. Cleaned-up production and more practiced, articulate vocals emphasize just how adept the five-man Ohio thrashers are at carving out their own brand of aggressively precise metal. 2011’s Forever Abomination and this year’s Serpents Unleashed sound fully realized in a way Skeletonwitch has been gradually approaching with every release, raging through quick slashes of thrash guitar work, speed metal drumming (courtesy of Dustin Boltjes returning for a second record) and Chance Garnette’s ragged growl, all blackened by the band’s taste for macabre, physical imagery. It’s a whirlwind style that encourages a devoted word-of-mouth following; not a big surprise to see John Baizley returned to offer up artwork for Serpents Unleashed. It’s also needfully short, no song running longer than four and a half minutes and the album itself topping out at about 30, as Skeletonwitch careens through a dizzying blast of metal fury.

Skeletonwitch’s success in the studio continues to hinge on big-name producers’ interpretation of the band’s amorphous metal sound, however minor or seemingly inconsequential. Jack Endindo’s subtle approach on Breathing the Fire did little for such hook-laden songs, making Matt Hyde’s more robust tweaks on Forever Abomination both a noticeable and welcome change. Kurt Ballou handled production duties on Serpents Unleashed (his previous work with the likes of Converge and High on Fire an appropriate match) and the album retains much of the balance Matt Hyde brought to Skeletonwitch’s sound for Forever Abomination. Again, the vocals are lower in the mix, Garnette’s screeching bark secondary to the dual guitar work of his brother Nate Garnette and Scott Hedrick, consistently what makes Skeletonwitch stand out among other thrash disciples. Ornate melodies, wrought-iron riffage and the occasional wild hook contribute to a commanding instrumental presence, so Serpents Unleashed benefits from Ballou prioritizing some of the same elements Hyde did, similarly bringing out the wrenching bass and technical snarl of Boltjes’s double-kick drum kit. As the rhythm section and guitarists writhe in and out around Garnette’s guttural delivery, that raucous dance is a hell of a lot more interesting than the playful and varied vocals themselves, bassist Evan Linger and Boltjes locked in together with a startlingly brutal dexterity that pops off cracks and fills with ricochet abandon. This is as heavy as Skeletonwitch has ever sounded, every song a pummeling, explosive display of power that makes the most of the band’s abilities in direct contrast to the light, stinging approach of its earliest records.

The title track opens Serpents Unleashed with the building rumble and startling crash of towering waves breaching a wall, the album rampaging on uninterrupted until “Unending, Everliving” pauses in panting, snorting reverie. “Beneath Dead Leaves” steadies itself into an angry party anthem, the drums unloading in a mechanized, relentless assault. “I Am of Death (Hell Has Arrived)” and “From a Cloudless Sky” gallop together seamlessly with taught, staccato guitar figures flailing about, “Blade on the Flesh, Blood On My Hands” a more jittery, unstable version of that high-speed cannonball run. Majestic intros and the occasional moment of eerie stillness make “Unending, Everliving” and the standout crusher “More Cruel Than Weak” highly charged achievements. The latter builds slowly, and is noticeably longer than the album’s other tracks, a searing second half dominated by an adrenaline-soaked rhythm section that almost makes Garnette’s spitting growl seem tempered. Throughout 11 songs, Serpents Unleashed is Skeletonwitch’s heart-stopping best – a crazed, uncompromising version of the band at its darkest, most aggressive and – surprisingly – loudest to date.