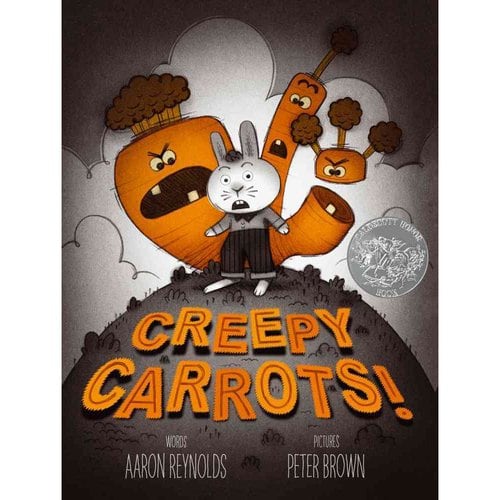 [xrr rating=4.0/5]Gluttony, stalking, delusions, psychic deterioration – just the kinds of subjects fit for a Caldecott-nominated picture book! Indeed, the cover of this year’s Creepy Carrots! is marked with the embossed Caldecott Honor Book seal, proof positive that it meets the criteria to be considered one of “the most distinguished American picture books” of the year. The plot – written by author Aaron Reynolds – follows Jasper Rabbit as his greed leads to his own undoing. Jasper gorges on carrots growing in Crackenhopper Field with little thought for anything other than his own pleasure until… the carrots start following him home. In the bathroom, on the street, at the foot of his bed, menacing carrots spook him wherever he goes until a second hard look or parental intervention reveal the carrots to be everyday items. Just a trick of the eyes! Product of a rampant imagination, they say. Still, his paranoia is in freefall and it’s not until Jasper goes to great lengths to construct a pseudo-internment camp around the carrot patch that he experiences a mental reprieve. SPOILER ALERT: So too do the carrots, as the walls that are keeping them in are the same walls keeping their predator out.

If this sounds like a morality tale of an Alfred Hitchcock Jr. variety, that’s about right. Visually it recalls exactly that, an old episode of “Alfred Hitchcock Presents” or “The Twilight Zone,” albeit with a tad less existential agony. Illustrator Peter Brown assembles his storyboard in grayscale, the frames bound by rounded back edging as if on a black and white contact sheet. An oversized book, the reading experience mimics that of watching a film on a movie screen, as the big pages fill up the field of vision. The long shadows of this horror/noir palette are interrupted with bits of orange, which, not accidentally, is a color often associated with danger. This selective colorizing highlights the malevolent carrots, of course, but also is a visual grab that identifies the differentiations between what Jasper sees versus what Jasper thinks he sees. These “carrot presences” were merely the awkward fold of a curtain or an innocent rubber ducky glimpsed too quickly.

The nods to the masters are subtle but detectable: the scene in which the carrots hide behind a shower curtain is a deliberate play on Psycho, while the not-carrot surrogates found in the shed – a chainsaw, a pair of hedge clippers – give an understated wave of acknowledgment to slasher flicks. For the most part, Creepy Carrots! is an age-appropriate psychological thriller, “terrible, carroty breathing” heard in Jasper’s bedroom is as threatening as these bogeymen get.

The “terror” of Creepy Carrots! (in quotes on purpose) is kept to a manageable minimum here considering the absence of true peril or gotcha scares. Theoretically, the most frightening sequence should be that of Jasper unceremoniously pigging out on carrots, if we are to believe (as we later do) that these root veggies are sentient beings. As monsters, the carrots are far from nightmare material, drawn comically with mean eyebrows and one or two blunt jack-o’-lantern teeth. The climax of fear comes when Jasper sees carrots (alternatively, stray wildflowers) gathered around a tombstone, and it’s only here that mortality is even hinted. This is the turning point at which Reynolds and Brown reel it back, seeing Jasper through to safety and resolution by way of self-sufficient problem-solving.

Encompassing the canon of old school Grimm’s fairy tales, some of the weirder work of Roald Dahl and Maurice Sendak, the Goosebumps series, or even picture books from other cultures, the genre of children’s horror is certainly nothing new. (The French corner the market on this – La Tête dans le sac is about a girl who puts her head in a plastic bag, and the cover of La Visite de Petite Mort shows a little girl – uh-oh! – leading Death by the hand, to give just a couple examples.) Creepy Carrots! is nowhere near as unsettling as any of this, it’s just a quick peek around that corner. As true horror has trickled down to (over-)saturate the YA market thanks to Twilight and friends, Creepy Carrots! can, in its small way, familiarize little ones with the elements of scary, supernatural stories. Its inspirations may be more traditionalist, but who wouldn’t trade R.L. Stine for Rod Serling?