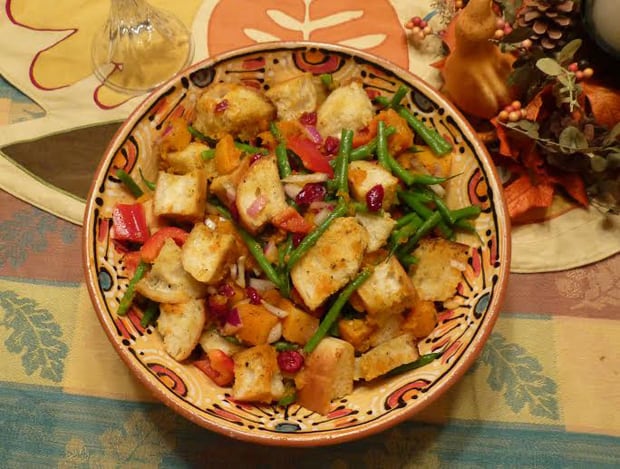 On Thanksgiving, all the fussy bird-roasting and side dish prep and gravy lump purification serve but one master—stuffing. Like pizza, sushi rolls and In-N-Out Animal-Style Double-Doubles, stuffing falls into the realm of Perfect Foods. The moist, yet supple, bread bits. The flecks of sage and thyme. The texture plays of crunchy outside baked bites and creamy, pudding-like middle morsels (don’t even think about cramming this goodness into the turkey’s ass. Casserole dishes only!). Its spongy, gravy-sopping prowess. Yes, I could eat an entire plate of nuthin’ but stuffin’ and waddle into Black Friday a happy girl.

But maybe you’ve been using that same favorite stuffing recipe since the Bush administration (guilty), and your table could really use a shakeup. Or you’re bringing the stuffing side dish and have no idea what the oven situation is going to be like. When you want the spirit of stuffing, this Harvest Panzanella preserves the beloved texture of toasty flavored bread with lighter, fresher flavors.

I took my favorite summer panzanella salad, by THE Barefoot Contessa, and gave it a major fall overhaul. Unless you’re in my freakish warm corner of the country, the days of waiting for the sun to blush your garden tomatoes faded away with your first fun size Halloween candy bar. The sweetness of tomatoes has been replaced with sweet roasted butternut squash, and the cucumber’s crunch has been replaced with green beans. To make the dressing, I pillaged my precious collection of GOOD olive oils and vinegars. Since this is a simple salad that you’re making for a once-a-year meal, break out your best, or seek out new bottles—any mid- to upscale grocery store is going to carry a wide variety of flavored vinegars and fine olive oil. I used Cranberry Pear vinegar from Bennesere Oils and Vinegars in Portland (sigh… homesickness), but a pomegranate or raspberry vinegar would work just as nicely. Also, be sure to use day-old bread. Stale bread will stand up to the dressing without getting mushy.

Though I created this concoction to bring something decent to the Spectrum Culture Thanksgiving Spectacular table, I think I stumbled on an accidental successor to my dear stuffing recipe’s crown. This is one of the best salads I’ve made in recent memory, and according to my husband’s guinea pig next-day lunch experiment, even stood up to becoming a leftover. Be brave! Let the mashed potatoes hog the casserole dish, and open your mind up to a serious side dish contender.

Preheat the oven to 425 degrees. On a large baking sheet, spread the butternut squash cubes evenly, then drizzle with olive oil. Top with the Italian seasoning and salt and pepper to taste; stir to evenly coat. Roast for 25-30 minutes, until the squash is tender to the touch (be careful though, don’t go burning yourself). Remove from the oven and reserve on a plate to cool to room temperature.

Lower the oven temperature to 400 degrees. On the same baking sheet, spread the bread cubes evenly, then drizzle with olive oil. Season with salt and pepper to taste; stir evenly to coat. Toast for 20-25 minutes, until the bread is developing a golden hue but is still slightly soft. Remove from the oven and reserve on a plate to cool to room temperature.

When the bread and butternut squash have cooled, toss all salad ingredients together in a large mixing bowl. Add the dressing and stir by hand, because it’s one of those jobs a spoon just can’t do justice to. Season with salt and pepper, and refrigerate for 1-2 hours. Allow to stand at room temperature for at least 30 minutes before serving.