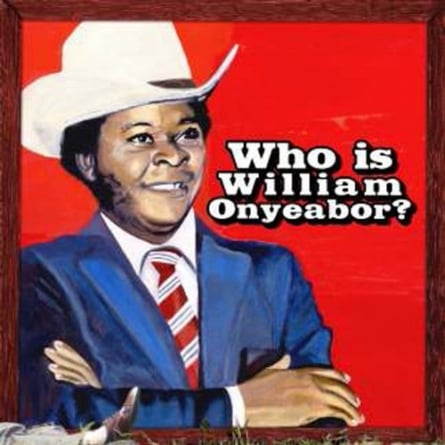 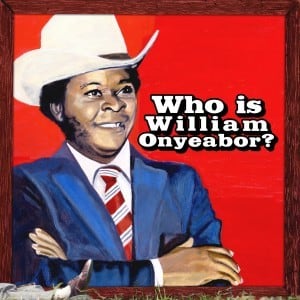 One look at the title and I recognize the standard marketing technique: bait the hook with a rhetorical query and hope that people will be intrigued enough to buy the album. But it turns out that it’s a legitimate question without a clear answer. Who Is William Onyeabor? The facts are fairly slim. He’s a Nigerian musician who released several Afro-funk albums starting in 1978. His songs turned up on African music samplers like Nigeria 70: The Definitive Story of 1970s Funky Lagos and Joe Tangari’s Africa 100 bootleg playlist. A few years later, he became a born again Christian and dropped out of the secular music scene. Since then, he’s shown no interest in discussing his past, neither his earlier work nor his post-recording life. When Luaka Bop put this project together as the latest in their World Psychedelic Classics series, Onyeabor refused to participate, leaving them with a fairly vague biographical background. Plenty of tantalizing details have emerged over the years – a Russian film school, a personal recording studio and a village chiefdom – but there’s no real narrative and little corroboration.

If the liner notes can’t resolve the question, then we’re left with Onyeabor’s songs, which graft P-Funk party music onto African roots. The American inspiration is obvious as he demonstrates his love of ‘70s era funk, soul and disco, but his core remains deeply Nigerian, sharing many elements with his countryman Fela Kuti. Lyrically, he borrows from both traditions. Just as George Clinton built extended grooves around short, memorable slogans, Onyeabor bases his tunes on simple statements, chanted repeatedly. But where P-Funk favors a hedonistic kind of humor, with lines like “Get up for the down stroke,” or “Here’s a toast to the boogie/ We’ll funk to that, bottoms up,” Onyeabor’s message is generally more direct and serious. For instance, on “Good Name,” he preaches, “Good name is better than silver and gold,” and warns against ethical compromise. These proclamations are more in line with Fela’s Afro-beat chants.

Onyeabor’s music walks a similar thin line. He assembles his Afro funk grooves under the influence of drum machine beats and analog synthesizers, but the trance-like surrender to rhythmic repetition is very African. The P-Funk and Fela influence is clear, but the songs break from both those sources with a sparse simplicity. There are layers and polyrhythms, but they rarely get more than three or four strata deep. Aside from the female singers, it sounds like he recorded most of these parts on his own.

The opening track, “Body and Soul,” sets the formula for the whole career-spanning compilation. In this case, the basic structure is built around a simple guitar riff, a steady drum beat and synthesizer fills. The keys take center stage, as Onyeabor experiments with a wide variety of synth textures. Aside from the requisite string pads and electric piano, he finds some wilder modulations that come straight from the Mothership. Deeply danceable, this track has the strongest P-Funk vibe, recalling “Chocolate City.” The only drawback is that the piece is a bit long-winded, running over 10 minutes. His musical ideas could have easily fit in half that time, but Onyeabor covers the same ground again and again, hypnotized by his own beat. This aesthetic serves as a litmus test for the album; listeners who can engage with the repetition will appreciate the nuanced meditative vibe.

Over time, I have found myself drifting in and out of appreciation. While I enjoy his basic funk approach, the outlier tracks are the ones that prove most interesting. In particular, the distinctly reggae sound of “Heaven and Hell” stands out. Compared to many of the other songs, it has more lyrical density and the wah-wah guitar fills and horn punches provide a richer set of interactions. Similarly, the Afro-beat feel of “Something You Will Never Forget” offers more diversion with horns, tight guitar figures and more varied syncopation.

I still don’t know who William Onyeabor is, but his music suggests that he’s somewhat obsessive, finding comfort in repetition and subtle details. His lyrics stake a moral ground that’s certainly in line with his later religious conversion. The rest is a mystery. I’d like to think that he’s channeled that same focus to his current contemplations.