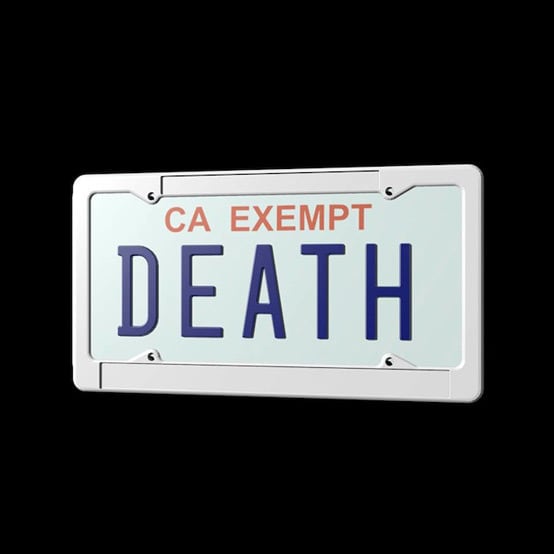 [xrr rating=3.75/5]Government Plates, the fourth(ish) full-length from the Sacramento experimental hip-hop(ish) trio Death Grips, was released to Soundcloud with zero forewarning and has since received barely any comment from the band. The album was a surprise, but its manner of release sure wasn’t. Government Plates comes almost a year after Death Grips released their penis-adorned second full-length of 2012, No Love Deep Web, for free to the internet against their then label’s (Epic Records) wishes. The hyperbolic punk rock narrative that’s followed the band since was only further reaffirmed by a few tour dates earlier this year where instead of a show the band left a suicide note and abandoned drum kit on stage while they themselves weren’t even in the given state. Death Grips resistance to traditional methods of promotion and release with Government Plates is by comparison tame. Luckily the music is anything but.

It’s probably easiest to compare the Death Grips on Government Plates with the Death Grips seen on the group’s first release, a 2011 mixtape by the name of Ex-Military, which saw the band experimenting with a more ambiguously produced sound, blending electronic, hip-hop and rock with a kind of punk-y patchwork quality that was a far cry from the streamlined android-ian electro hooks found on their breakout 2012 major label debut, The Money Store. With The Money Store, Death Grips stumbled upon a formula that could have sustained them for entire career. It was accessible in the best way possible, the hook-happy approach only adding to the band’s break-shit quota. But just a few months later they released No Love Deep Web, which seemed to answer the question what the new synth-heavy approach might sound like with all hooks removed. No Love Deep Web opted for sheer physicality, leaving MC Ride’s voice raw and letting the frontman’s bruiser energy carry the music.

Government Plates is even more of a jump than the one between Ex-Military and The Money Store. It’s been forever difficult to slot Death Grips into one specific genre. The production has always been deeply indebted to rock and electronic music, though it certainly shares a few DNA strands with a team like the Bomb Squad, while MC Ride is just as much an Iggy Pop acolyte as he is an MC. Government Plates further complicates things, with Ride’s role having less and less to do with the outright delivery of bars and becoming more and more an elemental force of nature in front of the music. And Zach Hill and Flatlander’s production now has more in common with noise outfits like Melt Banana or Black Dice, if Black Dice decided to make a hip-hop record with a more kaleidoscopic beat producer like, say, Madlib. It’s downright weird in places and absolutely Death Grips at their most musically adventurous.

The album opens in seemingly familiar territory with the exhaustively titled, Bob Dylan-referencing “You might think he loves you for your money but I know what he really loves you for it’s your brand new leopard skin pillbox hat,” which grinds itself out on a gigantic throbbing sub-bass synth. But the track’s weirdly offbeat drum fills are a sign that something’s askew. The next few tracks shudder between tangles of maximalist, cracked-glass synths and dodgy, tempo-flipping rhythms while Ride stealthily sneaks verses in between repeated warped mantras. “This is Violence Now (Don’t get me wrong)” jerks suddenly between techno and juke before descending into mechanical-nightmare ambiance, Ride repeating the track’s titular line like a robot drill sergeant.

The album moves like a debris-filled whirlwind. It’s not a record easily digested in the first few listens. It’s challenging and downright difficult in places. But there’s a thrill in its unpredictability and the way Ride is somehow able to insert himself where there’s no room left in the mix. “Birds” opens with some shrill synth blasts and a vocal rinsed through a few layers of digital crud. The track somehow stumbles onto a broken music box guitar sample before leaving nothing but Ride’s plodding multitracked vocals accompanied by a couple screams. With each track it’s clear the group have a direction in mind, and after a few listens visible structures do arise, but sometimes the music can almost feel freeform.

It’s unclear if Government Plates is the kind of album I’ll listen to for pure enjoyment. It’s easier to respect and appreciate than it is to like. Death Grips are currently way out there on their own, tunneling down a rabbit hole, resulting in some of the most unique and interesting music currently being produced. And there’s something elusive that makes it all work, even if that very quality means it feels consistently out of reach.