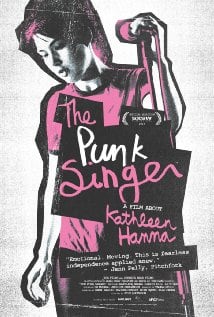 My absolute favorite Kathleen Hanna moment on record arrives deep into Mike Watt’s 1995 solo album, Ball-Hog or Tugboat? The former Minutemen bassist and Firehose frontman made his solo bow an alt-rock all-star affair inviting a slew of high profile special guests, including Eddie Vedder, Henry Rollins and three-quarters of Sonic Youth. Hanna shows up on the song “Heartbeat,” delivering what’s billed as a “spiel.” It’s ostensibly an answering machine message left by Hanna rejecting Watt’s offer to appear on the album, specifically citing one other participant who committed statutory rape against a friend of hers, but also decrying the prevailing tone of rock music at the time, which she called, “the whole, like, big-white-baby-with-an-ego-problem thing.” This interesting cameo crystallizes everything that’s appealing about Hanna: her bravado, toughness, sharp sense of humor (I especially like her conjecture that the male rock stars would better serve the world by working out their power trips as lifeguards at “Wild Waves or some shit,” shouting, “Don’t run by the poo-ull!” at kids), fearlessness and general unwillingness to stand down and be a silent observer of society’s injustices, no matter how slight.

The new documentary The Punk Singer, directed by Sini Anderson, attempts to give the whole picture of Kathleen Hanna: singer, musician, feminist, provocateur, activist and icon. It’s well-meaning and starry-eyed, exactly the sort of project that is destined to abound in the Kickstarter era of crowdfunded cinema (as the wall of thanks in the closing credits attests, this film is indeed a product of such a fundraising effort). It comes across as less documentary than tribute, verging on hagiography. It’s not a considered examination of a figure who was either inspirational or controversial, depending on who was being asked about her. Instead, it’s a celebration, couched somewhat in a mystery as Anderson structures the film as a buildup to answering precisely why Hanna withdrew from performing live in the mid-2000s. This piece of the film seems intended to provide a level of portent that is ultimately unnecessary. What works best is actually the more by-the-numbers examination of Hanna’s influence.

Anderson dutifully tracks through Hanna’s career, taking advantage of the ample amateur footage of various shows by Hanna’s band Bikini Kill back in their earliest days, raising a punk ruckus in various dingy little clubs. There’s a jolting rawness to that music and those performances that contrasts nicely with the more melodic and intricate work she did later with Le Tigre, a trio that comes across in the film as a sort of post-grunge Talking Heads (a comparison that never occurred to me before, but now I can’t shake it). Similarly, the confrontational youth of Hanna is especially interesting when compared against the still passionate but more measured person she is in middle age. Anderson captures these contradictions and more—notably, the way her early fierceness evolved into marked vulnerability, especially after she received a delayed diagnosis of late stage Lyme disease—but doesn’t really explore them, which is both a strength and a weakness. Nice as it is to have a documentary that doesn’t hammer home its points, there’s a nagging sense that a bit of depth is missing, that everything is ultimately too face value, hardly a fitting mirror of the subject who refused to accept the norms of the culture shaped by patriarchal concerns that she operated within. The Punk Singer is a decent introduction to Hanna, but it falters in making the case for her impact. Luckily, Hanna has done a good enough job of that all on her own—simply capturing her onscreen has value.