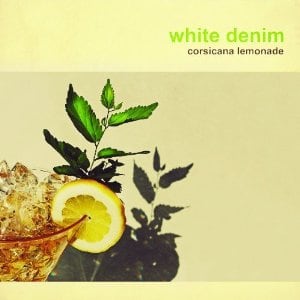 [xrr rating=3.75/5]There are undoubtedly a lot of different ways to describe the exhilarating classic rock sounds of White Denim’s sixth full-length album, Corsicana Lemonade. This is the one I keep landing on: contained herein is the music I wanted to hear emanating from Stillwater, the fictional band in Cameron Crowe’s Almost Famous. The writer-director’s wistfully comic magnum opus of his time as an underage Rolling Stone reporter was convincing in nearly every respect, with the dull-footed arena rock of the band at its core standing as the element that a discerning music fan had to kindly ignore. With their decidedly retro sound tinged with just enough modern shrewdness and style, Austin’s White Denim manages to make a reverence for the guitar power shots from a few decades ago seem not just wholly understandable, but downright cool.

Corsicana Lemonade opens with “At Night in Dreams,” a completely characteristic slab of rock goodness, with a cascade of tumbling guitar lines and frontman James Petralli bringing his velvety howl to lines like, “Sometimes it seems/ As if we could get a love to free us from pain.” It’s got a little bit of a boogie rhythm and an easy but propulsive pace, the sound of a band that has been at this long enough that they know exactly how to play off of each other. It’s potent, chewy and nicely compact, clocking in at just over four minutes. That’s one of the enduring skills of White Denim: crafting songs that sound big and bombastic enough to turn into extended rock ‘n’ roll freakouts, but are instead compact and focused, as if they’re still toiling in an era when one of the goals is to get the material honed down to fit onto two sides of a vinyl record (in the suddenly circular nature of music technology, it seems that is exactly the era they’re toiling in after all). Whether on the funky workout of the title cut, the soulful groove of “New Blue Feeling” or the catchy romp “Let It Feel Good (My Eagles),” the group is impressively locked in.

Jeff Tweedy invited the band onto his turf in Chicago for part of the recording process and is officially credited with producing two tracks, the tenderly swinging “Limited By Stature” and the ruminative, Yo La Tengo-ish final track, ironically titled “A Place to Start.” That connection likely stems from White Denim’s tenure as opening act for Wilco, in the first couple months of 2012. While the connection might make comparisons between White Denim and Tweedy’s best-known gig enticing to some, it instead got me thinking about the similarities the band has to Tweedy’s scruffier side project Golden Smog. As with that group, White Denim creates a thick stew out of its many influences, not really sounding like any particular predecessor yet somehow evoking whole swatches of music, as if they somehow compressed an entire late night 1970s AM radio playlist down into a particularly potent serum. Corsicana Lemonade is a gift to those who find classic rock irresistible, but have either grow weary of all the songs they’ve heard repeatedly for ages or simply want to hear something that doesn’t seem to have a thin veil of dust on it (or, more likely, both). White Denim shows it’s possible to look backward and move forward at the same time.