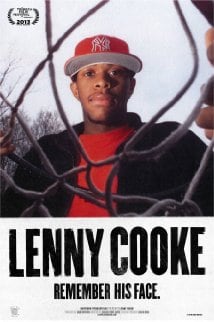 [xrr rating=2.5/5]The new documentary Lenny Cooke begins with a scout explaining to a group of high school basketball players the long odds of becoming NBA players. He points out that there were exactly 348 players on all the team rosters on the previous season’s opening night. Using the size of the entire U.S. population as a gauge, the coach explains, “to make it to the NBA, you have to almost literally be one in a million.” Charting the distance between hope and reality for teenagers who have staked their futures on NBA riches is hardly new cinematic territory, and the new documentary by brothers Ben and Joshua Safdie exists in the long, long shadow of Steve James’ brilliant Hoop Dreams, a film fast approaching its 20th anniversary. The main attribute of Lenny Cooke—the detail that makes it unique—is that it focuses on a player who didn’t just dream of NBA stardom. Lenny Cooke, unlike so many, had every reason to expect it was almost inevitable.

When the film begins, in 2001, Cooke is the top-ranked high school basketball player in the country, considered better than the likes of Carmelo Anthony, Amar’e Stoudemire and LeBron James. For everyone around him—friends, family, the sleazy sports agent-power brokers angling to cash in—it is unquestioned that the only real decision Cooke needs to make is whether he’ll jump to the NBA Draft straight out of high school. The thought that he might not make it is barely mentioned. And when Kwame Brown becomes the first high school player named as the number one draft pick just one year before Cooke would be eligible, the pressure mounts even more. It feels like Cooke doesn’t even have to reach for the brass ring, especially as a swarm of people compete to tell him how it’s going to be delivered right to him. Though the teenaged Cooke commonly couches his predictions about the future in “You never know” qualifiers, he’s also got it all planned how he’s going to use his millions to revitalize his old Bushwick neighborhood with a movie theater and a YMCA.

Of course, things didn’t fall into place for Cooke. His unexpected downward trajectory is tacitly acknowledged more than it’s actually traced in the film, maybe because there’s nothing all that dramatic about it. Though much is made of an Adidas ABCD basketball camp game in which Cooke is outplayed by a young James, subsequently seeing his overall ranking slip to a still impressive third in the nation, it seems that the young player’s fade was primarily caused by more than a year away from organized ball, when he finished high school after his playing eligibility was up. He enters the 2002 draft, isn’t chosen and the Safdie brothers follow up with a montage that shows him playing semi-pro basketball for several years, in front of smaller and smaller crowds. The filmmakers may be doing their best to avoid exploiting Cooke (either that or they’re short on footage), but the approach drains the drama out of the story.

So the directors push hard to cram in as much pathos as they can at the end, including a scene in which Cooke goes to Madison Square Garden to watch some of his old peers play in front of a packed house of roaring fans. Usually it requires the sadistic instincts of a Lars von Trier to come up with a gut punch like that. It’s more problematic when the Safdies use cheap special effects to have Cooke, now a bulkier adult, stand before his teenage self and dispense advice, a moment that doesn’t hold nearly the power of profundity that the directors evidently think it does. Really, it’s just cheesy. It’s not entirely reasonable to expect Lenny Cooke to live up to the high standard of Hoop Dreams, but there’s something telling in the fact that Steve James and his collaborators set out to make what they thought would be a simple basketball documentary and took advantage of it when they discovered they had so much more. The Safdies were in much the same situation. They certainly didn’t have cause to believe that Cooke would fizzle out when they started filming him in basketball camps. The difference is that they were still satisfied to stick with making a simple basketball documentary.