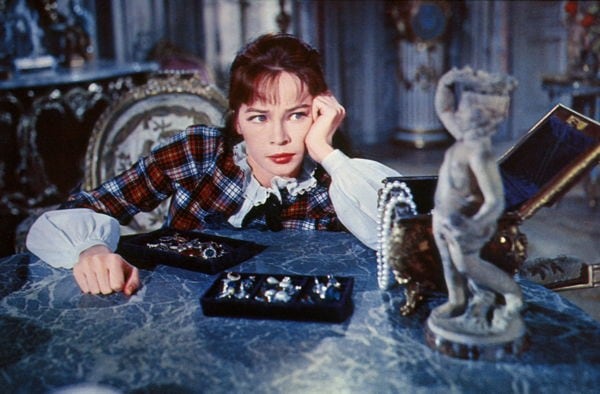 It’s been said many times that everyone who wins an Academy Award knows exactly how they’ll be described in the first line of their obituary. Gigi was the film that locked in the descriptor for Vincente Minnelli. Whether or not it’s his best film is up for debate, but at least he got his Oscar for something that felt like an appropriate representation of his talents: a visually resplendent musical, rife with florid emotions and tinged with distinctly European class.

Based on the somewhat scandalous novella by Collette, first published in 1944, the film project had been slowly percolating since 1951, when producer Joe Fields secured the screen rights to the story. He enlisted Arthur Freed, the musical maven of MGM, with the idea that it could be spun into an enormous success under his tuneful leadership. It foundered at the studio, in part because other attempts at adapting the novella (a French film, a stage version) failed to truly pique the interest of Freed and his chief collaborators, but also because of certainty that the Production Code office wouldn’t stand for the story’s focus on a young girl raised by courtesans who is actively positioned to become a wealthy man’s mistress.

Finally, the film project was kicked into gear by a couple of different live musical productions, one that never came to fruition and another that was a smash. When the rumblings about a stage musical version of Gigi began, Freed’s competitiveness kicked in and he paid off the producers to put the kibosh on their production. Not long after, My Fair Lady became a huge hit on Broadway. There was a certain similarity between the two stories, and Freed and Minnelli actively pursued Alan Jay Lerner and Frederick Loewe, the songwriting team behind Lady’s Tony Award-winning sensation, to preside over the musical adaptation of Gigi. There was an acute awareness among the creators that they were hewing closely to their major success, but Freed brushed away any misgivings, saying, “Stop trying to be different. You don’t have to be different to be good. To be good is different enough.” Still, the carbon copy qualities didn’t go unnoticed. Upon the film’s release, Bosley Crowther took to the pages of The New York Times to note, “they’ve come up with a musical film that bears such a basic resemblance to My Fair Lady that the authors may want to sue themselves.”

Set in 1900 Paris, the film opens with Honoré Lachaille (Maurice Chevalier) speaking directly to the camera, welcoming the audience as if he were an especially dandyish emcee (which frankly turns to creepiness when he strolls into the song “Thank Heaven for Little Girls,” with its overly effusive joy about how “They grow up in the most delightful way”). In short order, he’s joined by Gaston (Louis Jordan), who in some ways is the true protagonist of the film. He sets up one of the key themes of the story with the song “It’s a Bore,” surveying the abundance of pleasures his wealth provides with a metaphorical yawn, singing, “The Earth is round/ But everything on it is flat.” About the only time Gaston livens up is when he spends time with the comparatively poor and uncouth Madame Alvarez (Hermione Gingold) and her feisty granddaughter, nicknamed Gigi (Leslie Caron). 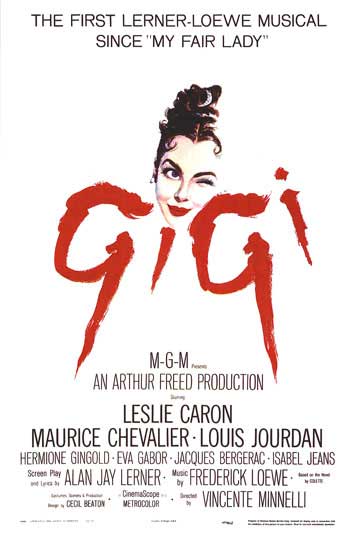 As is often the case with musicals, especially film musicals from the era, the story is a prolonged discovery of love. Gaston’s typically cavalier way with women has led one of his discarded conquests to attempt suicide, a development that is greeted with beaming pride by Honoré, who raises a champagne class and enthuses, “May this be the first of many!” To put forth a strong public face after the incident, Honoré cajoles Gaston into a series of lavish parties, which the film presents in a pageant of art production and costume design while still offering a mild cluck of disapproval at the dramatic decadence of the uppermost tier of the upper class. Naturally, this all bores Gaston, who retreats further towards the hardscrabble charms of Gigi, not knowing that she is simultaneously (and somewhat unwillingly) being trained in the finer art of securing an adoring male benefactor.

Under the strictures of the Production Code, this is all handled somewhat delicately, conveyed more with coy allusion than outright assertion. This has the effect of simultaneously sidestepping the sense of exploitation that could easily seep into the film and blunting its stronger points. By the time Gaston has secured Gigi as a mistress, only to discover that cramming his beloved girl into a predefined role is deeply unsavory, the transition feels forced, following the strictures of big screen romance rather than developing organically in the story. As he storms around Paris, showing off, rejecting and finally professing his pronounced affection for Gigi, Gaston comes across as more of a basket case than a conflicted soul.

For his part, Minnelli is at his most deft and cleverly inventive. Gigi largely lacks the sort of big numbers that defined, say, An American in Paris (the characters are more likely to sing their songs while seated comfortably), but that doesn’t mean the film is lacking in other visual splendor. Minnelli used color like few of his contemporaries, seen here in the bold red of Madame Alvarez’s apartment and the shifting orange, red and violet skies in key scenes, as if the director were trying to get every unlikely tone of nature’s palette into a single film. There are equally interesting details to certain bits of staging, such as the number “She is Not Thinking of Me,” which is largely presented as Gaston’s inner monologue, except for the brief moment he is left alone, when he begins singing aloud in the typical musical style. If Minnelli felt duty-bound to deliver an audience-friendly success (continuing his recent run of box office winners), that didn’t prevent him from finding ways to be daring.

MGM treated Gigi like a precious objet d’art, signaling their confidence in its superior qualities by debuting it at New York’s Royale Theatre, a space usually reserved for stage productions. It became a major hit, by most measures the biggest of Minnelli’s career. And he wasn’t the only one to claim Oscar gold several months later. Gigi won a total of nine Academy Awards (including Best Picture), at the time the most that had been claimed by a single film. Though its record would be bested just a year later by the 11 bestowed on Ben-Hur, it also had the distinction of winning in every category in which it was nominated. Gigi still had the most Oscar wins of any film with such a perfect record, at least until it was tied nearly 30 years later when Bernardo Bertolucci’s The Last Emperor also won nine. It was finally knocked down a slot in that column in the record books when Peter Jackson’s The Lord of the Rings: The Return of the King went 11-for-11, a feat it accomplished 55 years after Gigi’s big night. That’s interesting trivia, but it doesn’t really speak to the quality of Minnelli’s film. It doesn’t definitively mean, for example, that Gigi is a better film or musical than Meet Me in St. Louis or An American in Paris. By this time, Minnelli had already established himself as a master director, no matter what trophy Gigi forever affixed to his name.