March 03, 2021
Home Film The Hobbit: The Desolation of Smaug 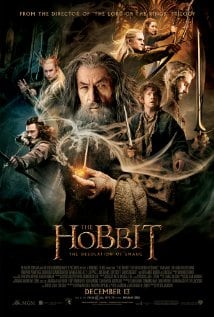 [xrr rating=2.75/5]Okay, it’s a bad sign that I’m now more than five hours into Peter Jackson’s Hobbit trilogy and the only dwarf I can name is Thorin. Let’s see…There’s the fat one. And the old one. And the one who likes weapons. And the one who appears to have an issue with alcohol and is played by the guy from Bloody Sunday. There’s the good-looking one, who might actually be a hobbit and then there’s the one that looks like Gimli. Then there are a few others.

When Jackson’s Lord of the Rings trilogy came out more than 10 years ago, I was entranced. Combining sensitive storytelling with stomach-clenching acting, Jackson produced a trilogy for the ages, a definitive take on J.R.R. Tolkien’s much-beloved books. I won’t go as far as to compare The Hobbit movies to George Lucas’ disappointing second round of films, but Jackson has sapped out much of the pathos this time around and replaced it with cartoony action sequences leaving us with a pair of very good-looking, but ultimately empty-headed prequels.

Sure, the source material is much more mercurial than the Lord of the Rings books, but in order to inflate The Hobbit into three films, Jackson injects new storylines to the point of drowning out Tolkien’s true narrative. Bilbo Baggins (Martin Freeman) has been reduced to a supporting character in his own film, his journey even murkier by the end of this second part. Think back to The Fellowship of the Ring: When Frodo and the other hobbits set off from the Shire, it feels as if they are actually going on a journey. There is something magical about that first step, something Jackson wasn’t able to replicate in An Unexpected Journey.

So here we are with the middle film, picking up where the first one left off. Bilbo, Gandalf (Ian McKellan) and the dwarves are on the run from the orcs and encounter one mind-numbing set piece after another as they struggle to keep their skins. We see fights with giant spiders, a meeting with a “skin-changer” and, of course, legions of orcs. Unfortunately, these skirmishes are devoid of nuance or danger. It’s Middle Earth with its mysticism scrubbed off. It feels as if Jackson has compromised himself and his entire vision.

The Desolation of Smaug also lacks the organic cohesion of the LOTR films. It is a grab-bag collection of vignettes cobbled together. Not only does Legolas (Orlando Bloom) pop up in an ill-advised cameo when this new fellowship is captured by wood elves, but Jackson has invented an entirely new character, Tauriel (Evangeline Lilly, proving that “Lost” isn’t the only place she can’t act) to create romantic tension with one of the dwarves (who I still cannot name). While the introduction of Tauriel could have given the film some emotional resonance, she and Legolas are mostly on-hand to lend a well-placed arrow when Bilbo and the dwarves find themselves in peril.

Luckily, the film picks up in its final section. The dragon Smaug (voiced and motion captured by Benedict Cumberbatch) is an amazing creation that tops even Golem (although I sometimes wished he’d just shut up and start frying folks) and Gandalf has a brief yet startling confrontation with a character named the Necromancer. Jackson leaves all of his characters in great danger as the film finally lurches to its finish, setting us up for a few epic battles to come. The Desolation of Smaug has a few beautiful moments, but with a legacy to live up to as great as Lord of the Rings, these two Hobbit films feel like one of those Star Wars spin-off novels where they take place in the same universe as the main storyline, but don’t actually feel like a true part of it.