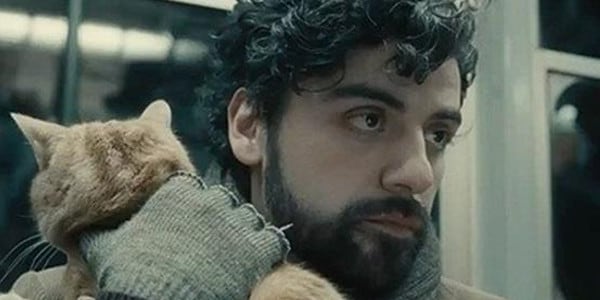 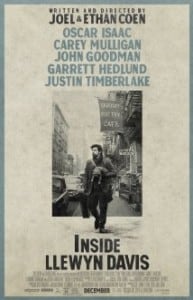 Ah, hipsters, you gotta love them. In a society dictated by Facebook and Pitchfork, hipsters are enjoying a greater power share, one that rivals the early ‘60s when a very different kind of hipster cat changed the face of popular music. That is why Inside Llewyn Davis, the new film from the Coen Brothers, is an allegory about a very different “Me Generation,” one that chronicled their daily travails with a pen and a folk guitar rather than wielding smartphones and Instagram.

Starring Oscar Isaac as its titular character, Inside Llewyn Davis chronicles the aimless life of a wannabe folk singer as he shuffles from one open mic event to another, crashing on couches and wreaking general mayhem with his friends along the way. Although he is a talented musician and possesses a bruised sensitivity, Llewyn just can’t help but cause problems for those around him. He’s already knocked up Jean (Carey Mulligan), the partner of his friend Jim (Justin Timberlake) and needs to find money for an abortion. And this isn’t the first time Llewyn has found himself in this sort of situation.

What is plainly obvious is that Llewyn is the source of his own troubles. He skates along on a patina of inertia, afraid to make any real sort of commitment to his friends, his family or his art. He is impetuous, rarely thinking beyond the next day. For example, when he is called into Columbia Records to help Jim cut a track (a hilariously bad anti-NASA song called “Please Mr. Kennedy”), Llewyn opts for the quick paycheck rather than wait for royalties, the lucre incomparable if the song becomes a hit.

The Coen Brothers do create one of their most complex characters in Llewyn Davis, his sadness linked to a subtle backstory the filmmakers weave into the fabric of the narrative. We know that Llewyn once had a singing partner, one who is no longer on the scene. His invalid father spends his days confined to a nursing home, something that disgusts and upsets Llewyn. He is rudderless and he knows it, trapped in an unremarkable existence. If the music thing doesn’t pan out, he’ll have to go back to the merchant marines, and no one wants that.

The Coens (and the film) break out when Llewyn takes a road trip from New York to Chicago to follow up on an opportunity with impresario Mr. Grossman (F. Murray Abraham), a name Dylan fans should recognize that cannot be pure coincidence. It’s here that we learn about what is keeping Llewyn down, even if the people in the car are complete strangers, one being a dope fiend (John Goodman) and the other a James Dean acolyte (Garrett Hedlund). Away from his milieu, Davis attempts to reconcile with his demons (including one big one in Akron, OH), but soon the Coens return him to New York and back to where the film started. It’s a subtle replay of the film’s beginning, but as Llewyn walks out one door, a new legend enters. It is here that we learn that Llewyn will never make it as a singer. He will fade into obscurity. It will take the modern hipsters just a little more time to do the same thing. Llewyn Davis simply didn’t have the use of the internet to propagate his own myth.