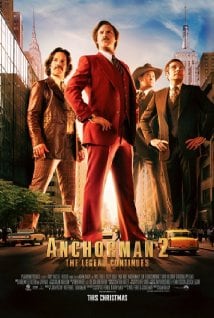 [xrr rating=3.0/5]Given the caliber of its stars, it’s not surprising that Anchorman: The Legend of Ron Burgundy became such a success. The team of Will Ferrell, Paul Rudd, David Koechner and Steve Carrell had a potent comedic chemistry and the film itself served as a herald for producer Judd Apatow’s imminent domination of the comedic world. What is surprising is that the movie became a success despite being insanely weird; the story of an absurdly macho local anchorman in 1970s San Diego is so bizarrely specific that it had to be packed with jokes just to pull of the premise. It takes Anchorman 2: The Legend Continues until about halfway through its two hour run time to hit nearly the same level of strangeness, but once it does, it’s relentless.

Nine years after the release of the first film, it’s admirable that Ferrell and director/co-writer Adam McKay don’t feel the need to reintroduce their characters. Instead, we’re pretty much tossed into the fray immediately, with the husband/wife anchor team of Ron Burgundy and Veronica Corningstone (Christina Applegate) being broken up by a retiring newsreader (Harrison Ford). As one does when faced with failure, Ron becomes a suicidal drunk slumming it through Sea World gigs, until a producer (Dylan Baker) offers him a graveyard shift on a new 24-hour news network. Keep in mind, this is 1980, so the idea of an entirely news-based channel is a novel concept. Also, there will be man-perms and crack jokes.

For most of Anchorman 2, the jokes come at a rapid beat, but it’s almost always the ones unrelated to the plot that stick the landing. James Marsden’s turn as an antagonistic rival newscaster at the new network never quite gels, despite the repeated scenes of him demonstrating his magnificent cheekbones. A retread of Brian Fantana’s (Rudd) hidden stash of seduction tools feels almost obligatory, while Champ Kind (Koechner) is reduced to shouting his catchphrase “WHAMMY” and his desperate longing for Ron. The jokes that really land are small things, like the team’s hysterical group reading of a “Garfield” comic collection and their Monkees-like shared apartment with its giant Pop Art paintings of themselves.

McKay and his troupe of actors give it a game go, but the film is dominated by a strangely serious criticism of the 24-hour news cycle and references to the first film. But a little over an hour into the movie, something magical happens: Anchorman 2 goes absolutely insane. Like, Ferrell bottle-feeding a shark and then serenading it, insane. The evil ghost of Stonewall Jackson insane. A giant newsreader brawl in New York City insane. That last one is one of the finest parts of the movie, even as it cribs from one of the original’s most memorable scenes, layering on the celebrity cameos ridiculously thick. But more than that, it’s the central part of Anchorman 2 that goes for broke and recalls that the funny part of watching Ron and his pals is not necessarily their pompousness and the newsroom. Instead, it’s just how bizarrely over the top their world can be and how willing everyone is to just go along with it. It’s never going to match the first film, but half of the time, Anchorman 2 gets it 100% right.