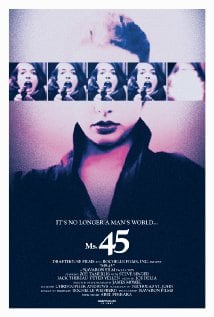 [xrr rating=4.0/5]Thana (Zoë Lund, then known as Zoë Tamerlis) works as a seamstress in Midtown Manhattan’s Garment District. Pretty, mousy, and mute, she declines an invitation to hang out with her female coworkers. She pays a high cost for shunning the sisterhood.

Drafthouse Films has distributed wildly different and essential cinema in the past few years, from the rediscovered Taekwondo-Ninja musical Miami Connection to the provocative documentary The Act of Killing. Their latest rerelease is a restored version of the 1981 B-movie Ms. 45. The Drafthouse imprimatur is a sign that this is not just another B-movie. Director Abel Ferrara produces the kind of exploitation that makes you think twice about its politics, not in terms of black and white but of red: blood red. Ms. 45’s example preceded a wave of Avenging Angels in the 1980s, pretty vigilantes doing it for themselves on the big screen. But this is not a simple tale of empowerment.

After turning down a girls’ night out, Thana is raped twice in the course of one evening. Her first attacker pulls her into an alley in broad daylight; this attacker is in fact played by Ferrara, though his cameo was cut for the film’s initial DVD release. A second rapist breaks into her apartment and is waiting for her when she gets home, and here she takes revenge with a symbolically loaded blunt object: a glass apple.

Ferrara’s first feature, The Driller Killer (1978), was the work of a man who reveled in the seedy Times Square grindhouses of the era. It was a crude and awkward but effective B-movie and, like Ms. 45, stands as a fascinating conundrum. These are movies that get off on sex and violence, and at the same time come off as a cautionary tales about the seedy pre-Giuliani New York that some romanticize. Driller Killer’s bad neighbors were a punk band, as suited the times. Ms .45 replaces that raw noise with disco, and the movie’s final reel is one long post-punk disco Halloween party. Thana’s first rapist and some of her victims are among the party guests (clearly the filmmaker didn’t have the budget for extras who weren’t already on the payroll). The scene recalls the final party of Lindsay Anderson’s O Lucky Man!, getting to that movie’s theme of eternal recurrence in less than half the time.

Thana’s bloodlust begins in self defense, and she uses her newfound killing power to help women in trouble. But she devolves into a serial killer vixen, seeking out Manhattan’s women-hating population: basically, all men. She ditches the no-makeup look for a vampy, luscious red-lipsticked bait, as if to suggest she’s asking for it. She is asking for it, of course. She’s asking for blood.

Ferrara uses gender roles and gender politics to draw in viewers who may not ordinarily seek out a revenge movie. And then he messes with them. Look at his 1982 film, Bad Lieutenant. Answering a call about a murdered nun, the corrupt lawman (Harvey Keitel) checks out the victim’s body, and I mean checks it out: Ferrara cast a voluptuous model for the body of this violated holy woman. Lund co-wrote the script for Bad Lieutenant, as if still inhabiting the role of an avenger luring dirty-minded men in the theater. Lund was only 19 when she starred in Ms. 45, but that voiceless role gave her a powerful voice that was sadly cut short. Zoe Lund died in Paris in 1999, of drug-related heart failure. She was 37.