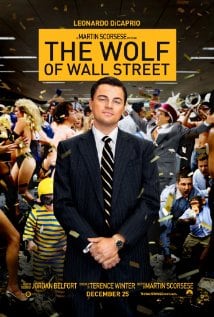 [xrr rating=4.5/5]Martin Scorsese roars back to the screen with The Wolf of Wall Street, a three-hour marathon stuffed with dark humor, gross-out gags, a fistful of Quaaludes and one awesome performance by Leonardo DiCaprio, proving that Mr. Moody can also do physical comedy. Scorsese is no stranger to movies that crackle and leap off the screen and The Wolf of Wall Street is easily the man’s best film since he killed it with Goodfellas a few decades ago.

Given a boost by “Sopranos” scribe Terence Winter, Scorsese charts the rise and fall of a Wall Street stock broker douchebag who squanders his lucre on the following very American vices: drugs, pussy, yachts, flashy cars, a helicopter and a mansion in the Hamptons. The decade may be different but that stars and stripes message is still loud and clear, folks: “Make a lot of fucking money and spend it on some really expensive shit that makes your dick look bigger. And don’t tell me we’re living in a gentler, kinder America than the Gordon Gekko days of the ‘80s and the halcyon surplus of the Clinton presidency.”

Wolf tells the true story of broker Jordan Belfort (DiCaprio), who made millions selling penny stocks in the ‘80s and ‘90s with his firm Stratton Oakmont. When we first meet Belfort, he is not even a full broker yet, lunching with mentor Mark Hanna (Matthew McConaughey) at Windows on the World while slamming down one martini after another before heading back to work. It’s here that Hanna imparts the advice that will shape Belfort’s future as a Wall Street scumbag. No, it’s not where he instructs Belfort to snort down tons of blow or to jack off a few times a day. It’s the following tidbit that Belfort uses to make his millions and where Scorsese trains his bow and arrow: It’s not mutually beneficial for the broker to make his clients rich. Instead, it’s just an illusion. All you need to show is the promise of future riches and the client will keep shelling out money while you get fat off his risk.

Although there is no Mafia in The Wolf of Wall Street, Scorsese is dealing with a different kind of organized crime and his undeniable fingerprints are all over the film. DiCaprio’s voiceover rings similar to Ray Liotta’s narration in Goodfellas and Robert De Niro’s spirited turn in Casino. But while De Niro and Liotta sound eerily elated to be alive, their voiceovers are tinged with sadness about the end of a way of life. DiCaprio just sounds amazed that his Belfort was able to pull off so many of the endless shenanigans we see unspool over Wolf’s ample running time.

Besides one very minor bloody punch, all of the red stuff in The Wolf of Wall Street is strictly theoretical. Belfort and his cronies (including Jonah Hill as the creepy Donnie Azoff) are all vampires looking to bleed their clients dry, but Scorsese earns his R rating for non-stop nudity, sex and drugs. Did you ever think you would see a film where DiCaprio, zonked out on downers, crawls along the floor, drooling and muttering in gibberish? This is Scorsese fifth collaboration with the actor and it’s by far DiCaprio’s most freewheeling and spirited performance since What’s Eating Gilbert Grape.

Like in other Scorsese films about power, Belfort ends up flying too close to the sun and attracts the attention of the FBI, led by Patrick Denham (Kyle Chandler). In one of the film’s best scenes, Denham visits Belfort on his yacht. Here Denham delivers the crux of the film: “Most of the Wall Street jackasses I bust, they were born to the life. But you, you got this way all on your own.” Scorsese has always had an interesting relationship with the American Dream, both attracted to and repelled by it. His characters yearn for and will do horrible things for fame (The King of Comedy), justice (Taxi Driver), Catholic guilt (Mean Streets) and cash (too many to list). Belfort joins Scorsese’s Pupkin, Hill and Rothstein as another who hungered for the filthy promises of America and got too good of achieving it all.

The Wolf of Wall Street is really only about Belfort (the story is taken from his autobiography) and we don’t spend any time with the people whose money he’s used to get rich. In some ways, it’s as if Scorsese is using his character and his charms to make a mark out of us, the audience. The movies are similar to Belfort’s con: we shell out our money in hope we’ll see something good, but many times Hollywood trots out the same line of bullshit. Luckily, The Wolf of Wall Street is one stock that makes good on its promise.